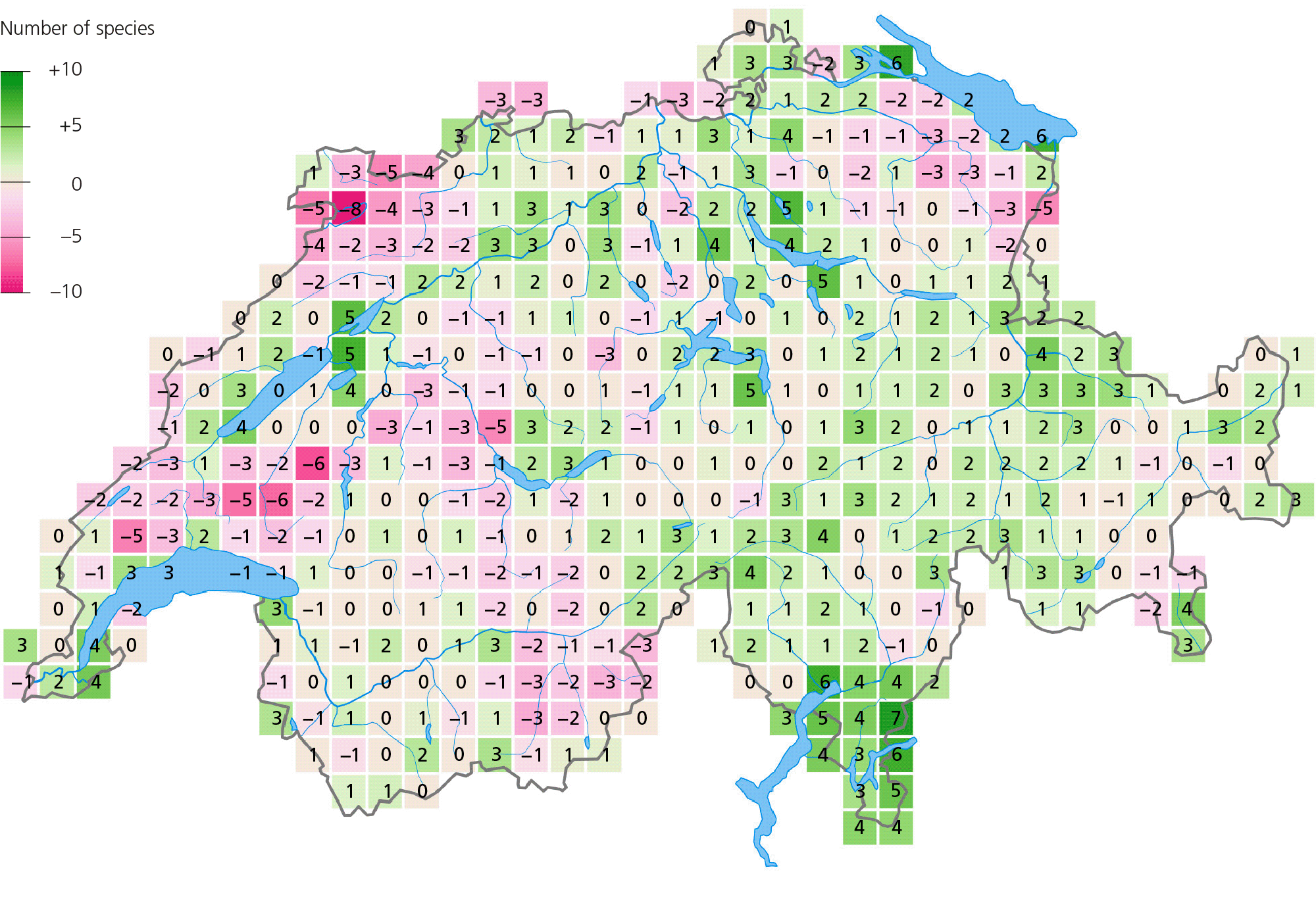 There are marked regional differences in the change in species richness. In Switzerland overall, the number of breeding bird species increased between 1993–1996 and 2013–2016. The average number of species per atlas square is also slightly higher. At the kilometre-square level, gains and losses are fairly balanced.

Regional patterns of change in species richness between 1993–1996 and 2013–2016 differ depending on the spatial scale. This is hardly surprising, as different factors influence the overall picture at each level of resolution (kilometre square or atlas square). For example:

The maps presented below are based solely on data of species for which a modelled change map (density or occurrence) or a point change map could be generated. Species for which changes were only recorded at atlas-square resolution were not included. We chose this approach because we assume that increased observer effort compared to 1993–1996 (about six times higher) has led to more complete species sets in the atlas squares and that an overall comparison of the two atlas periods would present too optimistic a picture. In the case of the modelled maps, in contrast, we were able to correct for the increase in effort. The point change maps are not affected by the bias either, as only species were included whose breeding sites were already fully surveyed in 1993–1996. We were thus able to make sure that the results presented here are not biased by the increase in observer effort.

Change in species richness in Switzerland

In Ticino, the increase in the number of species per atlas square is quite striking. The increase is mainly driven by the spread of species that were already common in the rest of the country, such as Mallard, Eurasian Collared-dove or Eurasian Magpie. Species richness has also increased in some parts of the Central Plateau. Most cases relate to atlas squares that contain wetlands or waterbodies. New species detected in these atlas squares include, for example, Goosander, Red-crested Pochard, Common Nightingale or Yellow-legged Gull. Common Stonechat and Middle Spotted Woodpecker as well as colony breeders like Rook or Alpine Swift were also newly recorded in several atlas squares on the Central Plateau. Gains were also observed in easterly regions of the northern Alps. New species in this area include, for example, Tufted Duck, Stock Dove or Rock Bunting, as well as the White Stork in the valley bottoms.

The steepest declines in the number of species per atlas square were recorded in agricultural areas in western Switzerland. The losses in western Switzerland and the Lake Constance area were mainly caused by the large-scale disappearance of farmland birds such as Northern Lapwing, Eurasian Skylark, Whinchat or Corn Bunting. In many other atlas squares on the Central Plateau, these species had already disappeared prior to 1993–1996. Species richness per atlas square has also declined somewhat in the Upper Valais, where several species that were already scarce in 1993–1996 have disappeared from large areas, including Spotted Flycatcher, Hawfinch and Corn Bunting.

In Switzerland as a whole, the average number of species per kilometre square remained largely unchanged between 1993–1996 and 2013–2016. There are, however, marked regional differences. The gains in Ticino and parts of Grisons and the losses in the western part of the Central Plateau and in parts of the Upper Valais, which are also visible at the atlas-square level, are particularly striking. At kilometre-square resolution, species richness has also decreased in large parts of northern Switzerland and in easterly regions of the northern Alps. 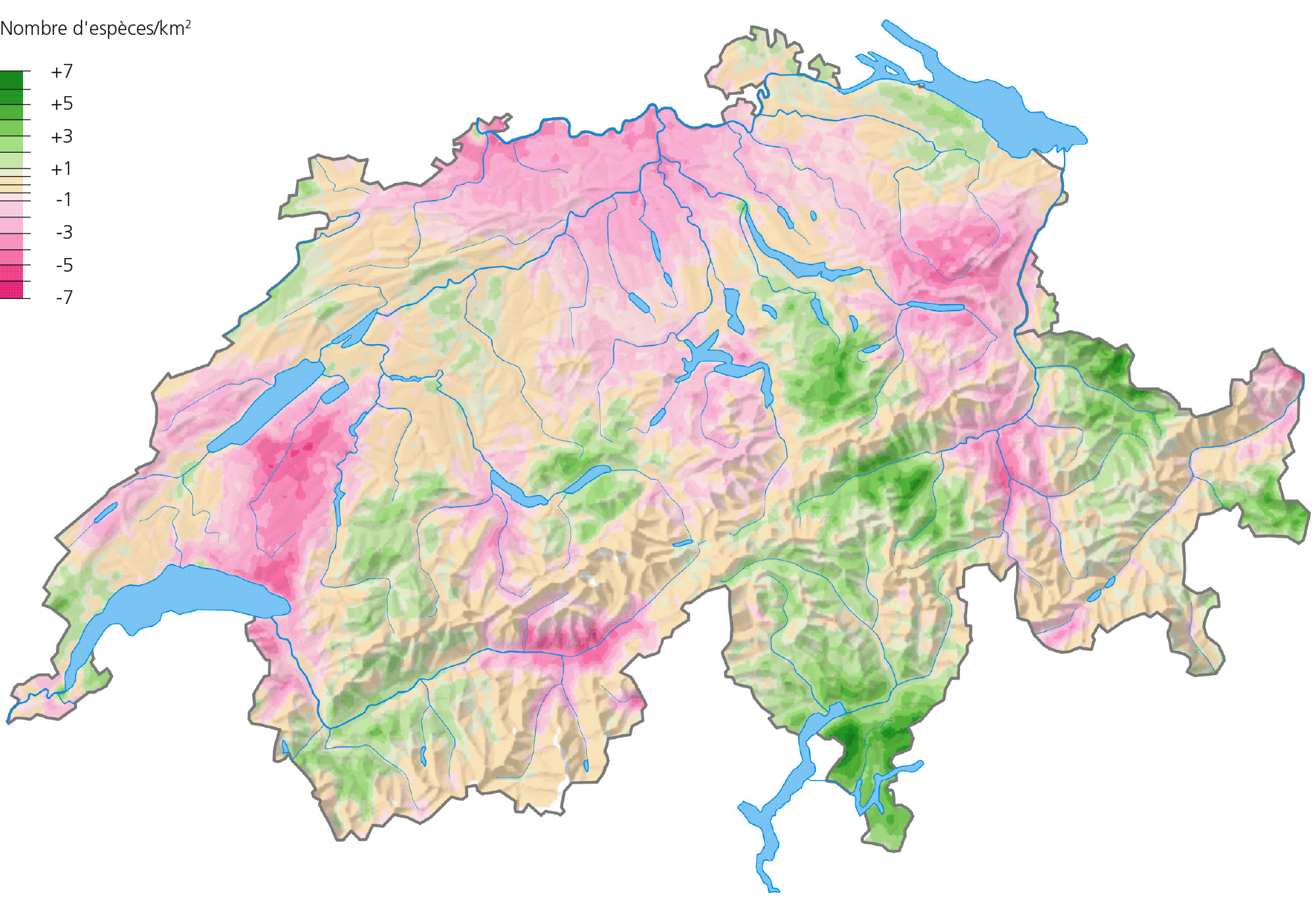 The drop in species richness was mainly caused by declines in widespread species of long-distance migrants, like Wood Warbler and Spotted Flycatcher. In addition, several birds of open landscapes have lost ground, such as Red-backed Shrike and Whinchat. Finally, a striking number of finches have experienced local declines or even disappeared completely, including species with very different habitat requirements such as Citril Finch, Common Linnet and Eurasian Bullfinch. The gains are in part related to the spread to higher altitude of common woodland species like tits or thrushes. In addition, several species have colonised new areas at a large scale, for example Common Woodpigeon or various corvids. Finally, the population increase of Eurasian Magpie and Mallard in Ticino is apparent at both atlas-square resolution and kilometre-square resolution. Other species common in the rest of Switzerland, like the Song Thrush, have increased at the kilometre-square level in Ticino as well.