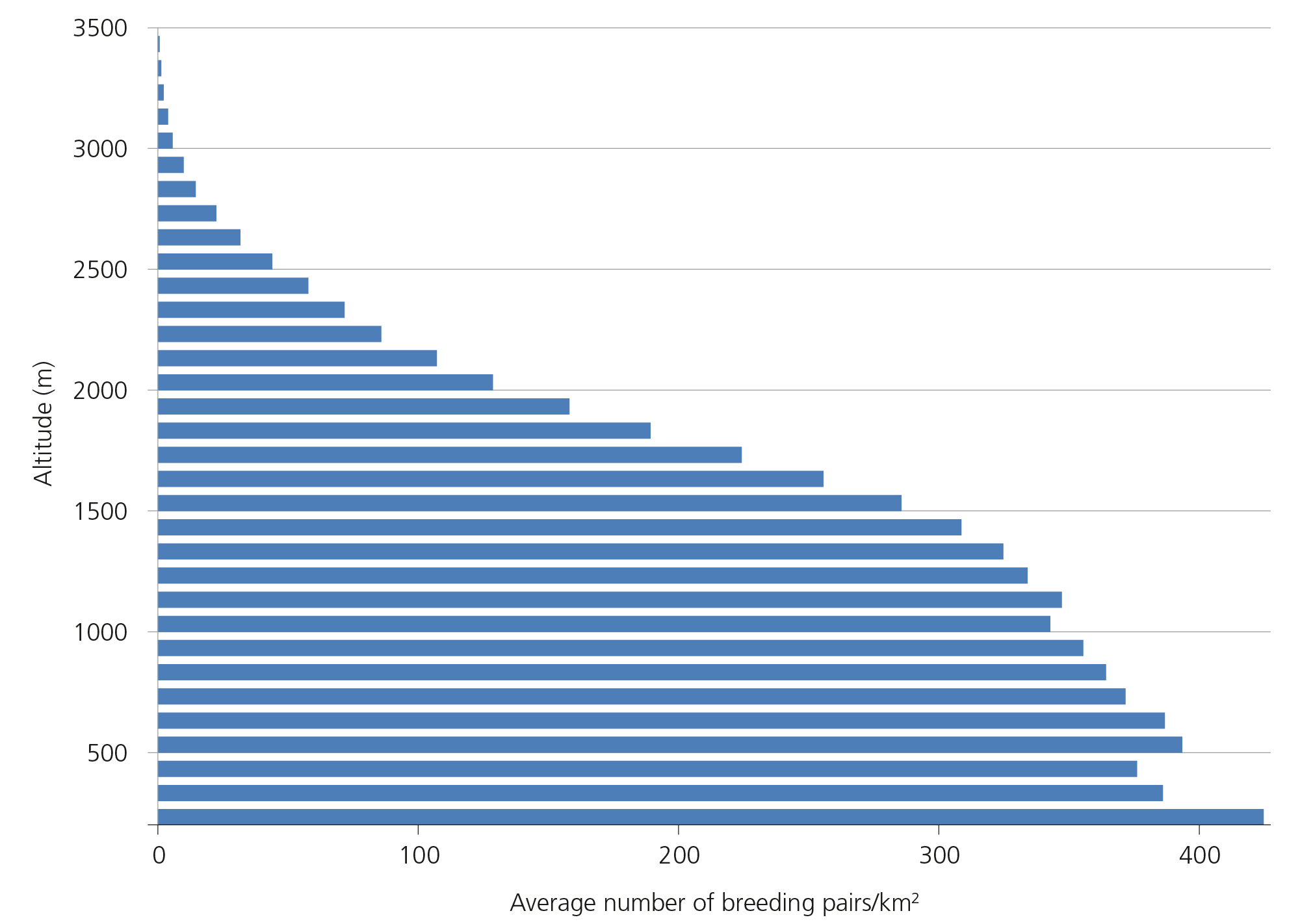 Average number of breeding pairs per kilometre square for each altitude level in 2013–2016.

Adding the estimated number of breeding pairs or territories in Switzerland for all species yields a total of just over ten million. About half of all birds breed below 1000 m. Urban and woodland areas accommodate the most breeding birds. The highest numbers of breeding pairs per kilometre square are found in areas that host large colonies.

Based on population estimates for each species, about ten million pairs breed – or at least occupy a territory – in Switzerland every year. The ten most common species account for about half of all breeding pairs (Common Chaffinch, Eurasian Blackcap, European Robin, Eurasian Blackbird, Northern Wren, House Sparrow, Coal Tit, Great Tit, Common Firecrest and Goldcrest). The two most abundant species – Common Chaffinch and Eurasian Blackcap – together have a combined population of about two million pairs.

Based on the point maps, the density and the occurrence estimates for each species, we calculated the number of breeding pairs per atlas square (10 × 10 km). Only atlas squares with at least 50 % of their area in Switzerland and Liechtenstein were included. The highest population densities were generally found in atlas squares with a lot of settlement areas. Settlements accommodate many colonial species or species that gather in flocks, such as Rook, feral pigeon or House Sparrow. Together with the often large numbers of common songbirds, breeding-pair density can reach remarkable levels. Moreover, settlement areas in urban centres are often adjacent to woodland, while farmland, where species richness tends to be low, is scarce. 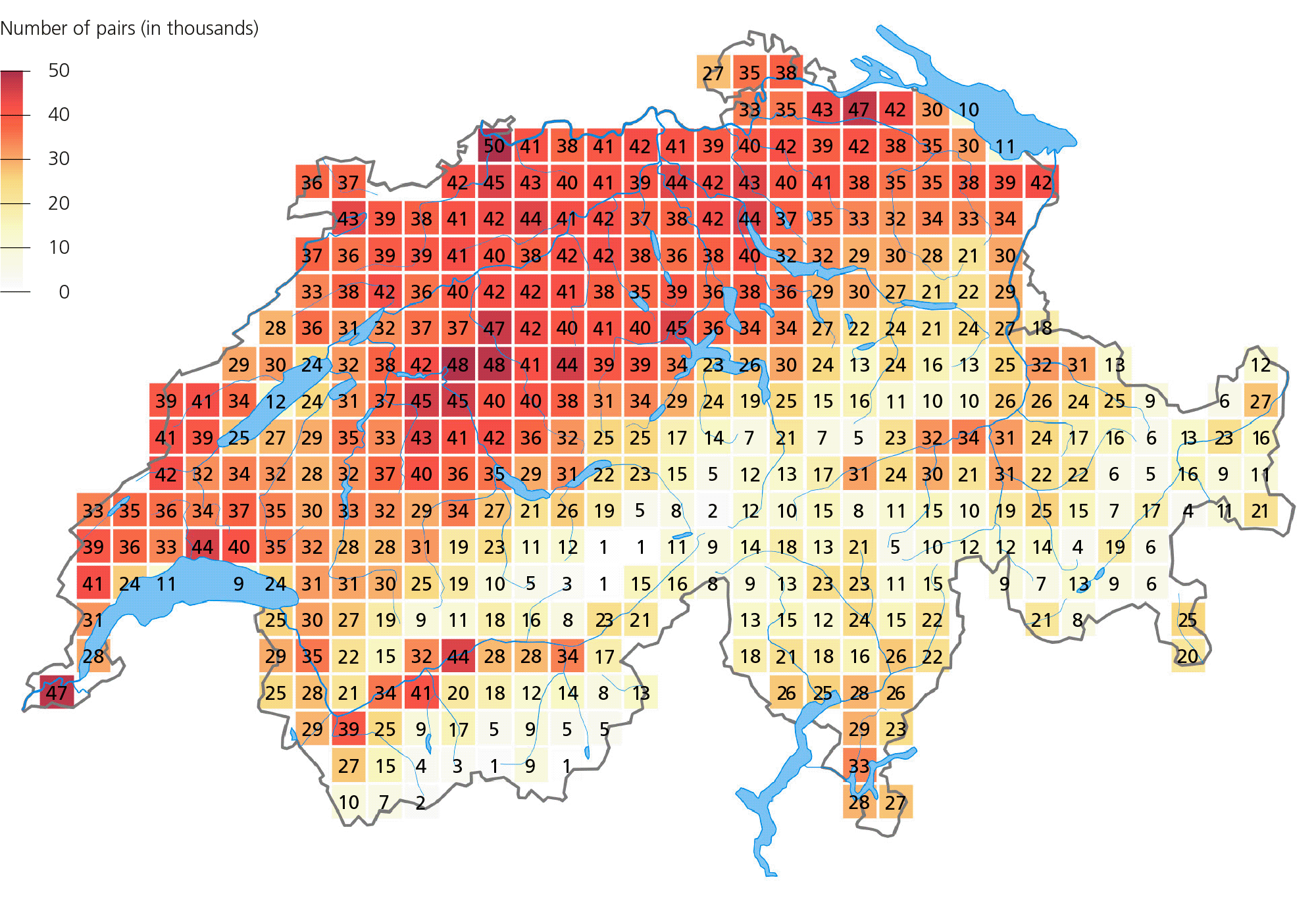 Population numbers per kilometre square in 2013–2016

The highest numbers of breeding pairs are found in kilometre squares (1 × 1 km) with large colonies (Rooks, gulls). This is the case in the cities of Basel or Bern, for example, and as many as 1000 pairs breed in one kilometre square in the Fanel nature reserve BE/NE. In general, high territory numbers occur in low-altitude squares with large areas of settlements or woodland, reaching 500, sometimes even 600 pairs/km2. Above 1500 m, numbers rapidly decrease, with about 100 pairs/km2 on average at 2000 m. Few birds breed above 3000 m. 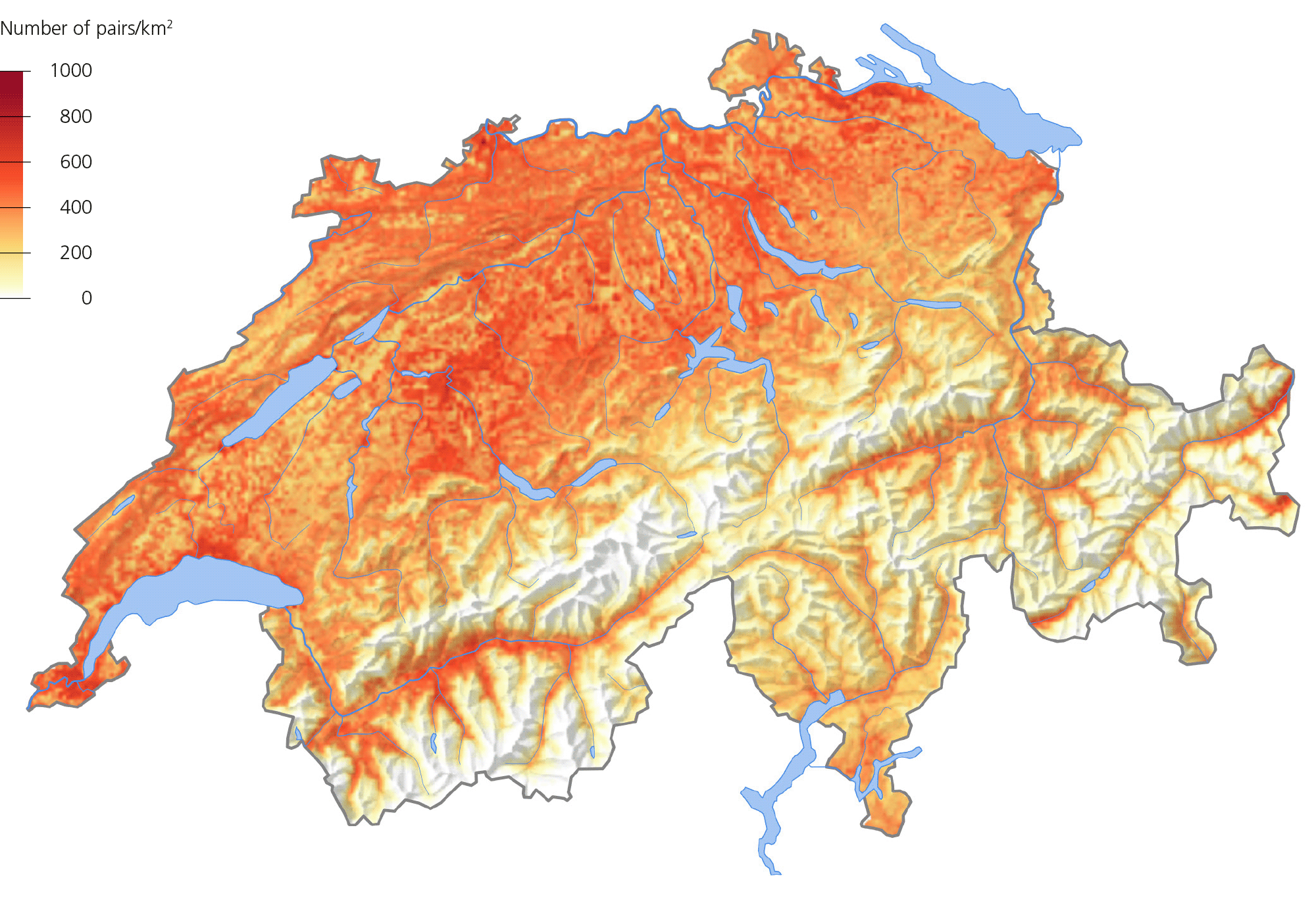