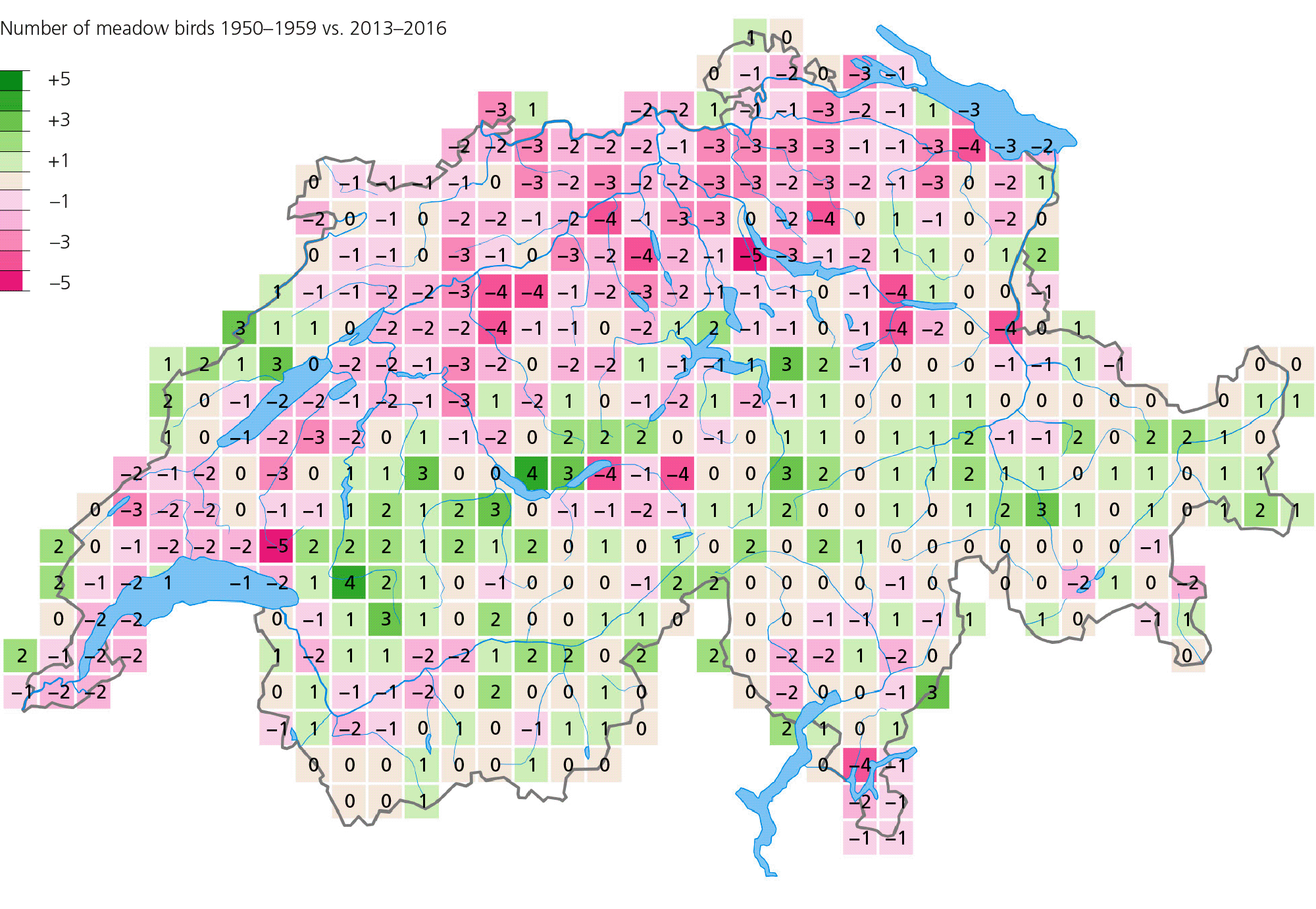 Change in the presence of six meadow birds (Common Quail, Corncrake, Eurasian Skylark, Tree and Meadow Pipit and Whinchat) per atlas square between 1950–1959 and 2013–2016. The disappearance of these species from the lowlands is a huge loss. The apparent increase in some parts of the Jura and especially in the Alps is due to incomplete survey coverage in 1950–1959.

The state of birdlife reflects our relationship with nature and the environment. The fact that 39 % of Swiss breeding birds are on the 2010 Red List and a further 16 % are considered Near Threatened is a clear warning sign and an indication of the poor overall state of habitats.

Thanks to the help of countless volunteers, the 2013–2016 breeding bird atlas documents the current distribution, abundance and altitudinal distribution of all breeding birds in Switzerland and Liechtenstein. Together with the three previous atlases, it highlights the marked changes that have taken place in the Swiss avifauna in the past 20 to 60 years.

Looking back over 60 years

The greatest changes in bird communities since the 1950s have occurred in the lowlands. Among other factors, agricultural intensification has caused Grey Partridge, Little Owl, Common Hoopoe, Tree Pipit and Whinchat to all but disappear from lower altitudes. This trend has continued in the past 20 years and has now also progressed to medium and high altitudes. Species that breed in meadows and on arable land are particularly affected.

But there have been positive changes since the 1950s as well: water quality in once polluted lakes and rivers has greatly improved, and new sanctuaries in shallow-water bays and adjacent reed stands provide better protection for breeding birds. These habitats have been newly colonised by several species, such as Tufted Duck, Gadwall, Yellow-legged Gull and Bearded Reedling. Nevertheless, the improvements were unable to prevent the disappearance of Common Snipe and Eurasian Curlew as breeding birds. Thanks to the decline in direct persecution and the ban on several environmental toxins, almost all raptors and owls occur in large numbers again – in some cases, such as the Red Kite, probably even the largest ever.

Widespread species on the rise, migrants in decline

The population trend of breeding birds in Switzerland, the Swiss Bird Index SBI®, shows a slightly positive overall trend. This is partly a consequence of the population growth in widespread species. Several rare and threatened birds, on the other hand, have become even scarcer, their index having declined to a low 55 % since 1990 (SBI® sub-index Red List).

Most particularly, long-distance migrants that winter in sub-Saharan Africa are declining throughout Switzerland. They are more specialised and more affected by habitat and climate changes in their breeding and wintering grounds than residents and short-distance migrants, and are therefore more vulnerable. The fact that long-distance migrants have mainly disappeared from the Swiss lowlands, where the impact of human activity is especially strong, is an indication that the decline is largely «home-made». 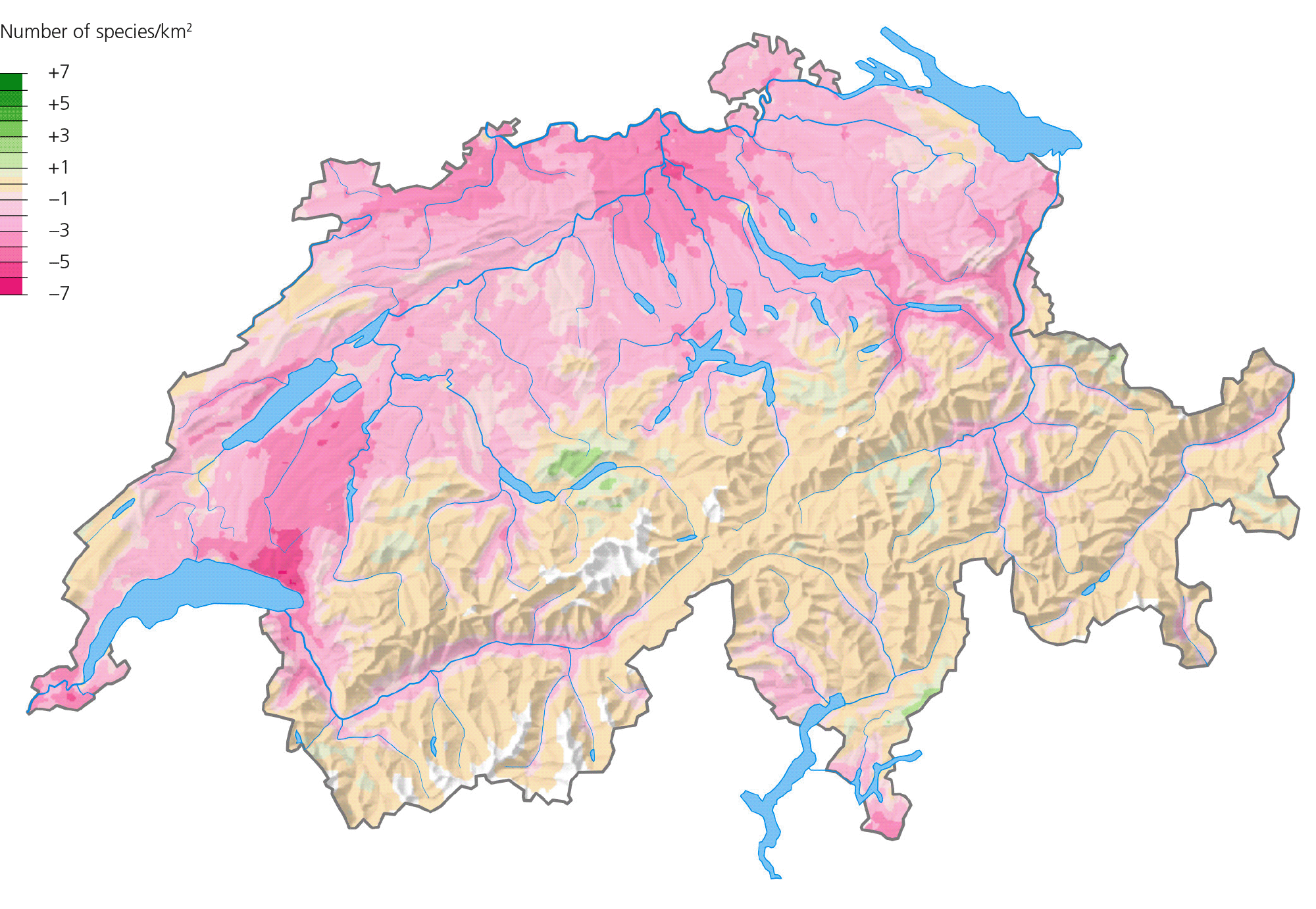 The change in distribution since 1993–1996 for long-distance migrants (30 species) is almost entirely negative at low and medium altitudes.

60 species, or almost a third of Swiss breeding birds, mainly occupy woodland, with several species also occurring in settlements where there are trees. The index for this group (SBI® sub-index Woodland) increased from 100 % in 1990 to 116 % in 2016. The 2013–2016 atlas shows that many woodland birds have benefited from near-natural forest management (more regeneration, fewer uniform spruce stands in the lowlands) as well as from the twofold increase in deadwood over 20 years and the expansion of forest area, especially in the Alps. However, the volume of deadwood remains small in forests on the Central Plateau and in the Jura. On the other hand, the overall timber stock has also increased, which means that there are fewer suitable habitats for species that depend on open and richly structured woodland, such as the Western Capercaillie. 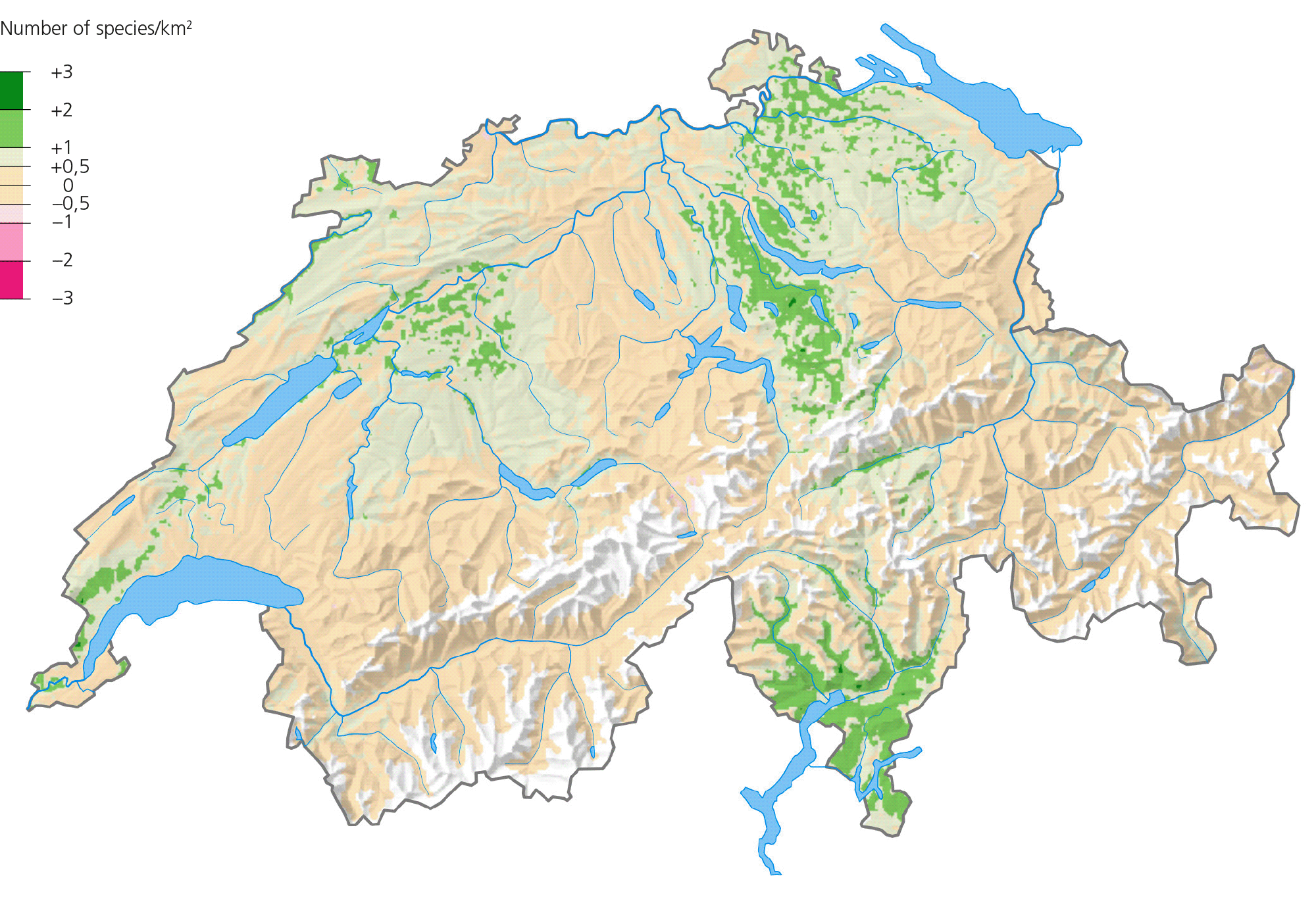 For 25 years now, farmers have received substantial subsidies for ecological services. The farmland birds selected for special protection are listed in the federal government's «Environmental Objectives in Agriculture» (EOA). The index for this group (SBI® sub-index Target species EOA) declined from 100 % in 1990 to 42 % in 2016. The 2013–2016 atlas shows that there are fewer EOA species in large parts of the country today than there were 20 years ago. A closer look at areas where recent losses are small reveals that these areas already held few farmland species back in 1993–1996.

Agricultural intensification is progressing to medium and high altitudes, with the result that nutrient-poor meadows are becoming scarcer and grass is mowed ever earlier in the year. Meadows cut so early in the season turn into ecological traps for ground breeders like Eurasian Skylark and Whinchat, as the nests are destroyed in the process.

Thus, the implemented measures have not even slowed the pace of species loss, let alone halted it. Still, several positive examples demonstrate that species conservation is possible using the instruments available. Measures have not succeeded at a large scale because the importance of high-quality biodiversity promotion areas like wildflower strips has been underestimated, and because habitat connectivity projects are insufficiently oriented towards the needs of target species.

Nevertheless, some species have increased in the lowlands, including Red Kite, Common Kestrel and Carrion Crow. But these are all highly adaptable species that build their nests in habitats adjacent to arable land (e.g. on forest edges), rather than in the fields, and do not depend on insects as a source of food. 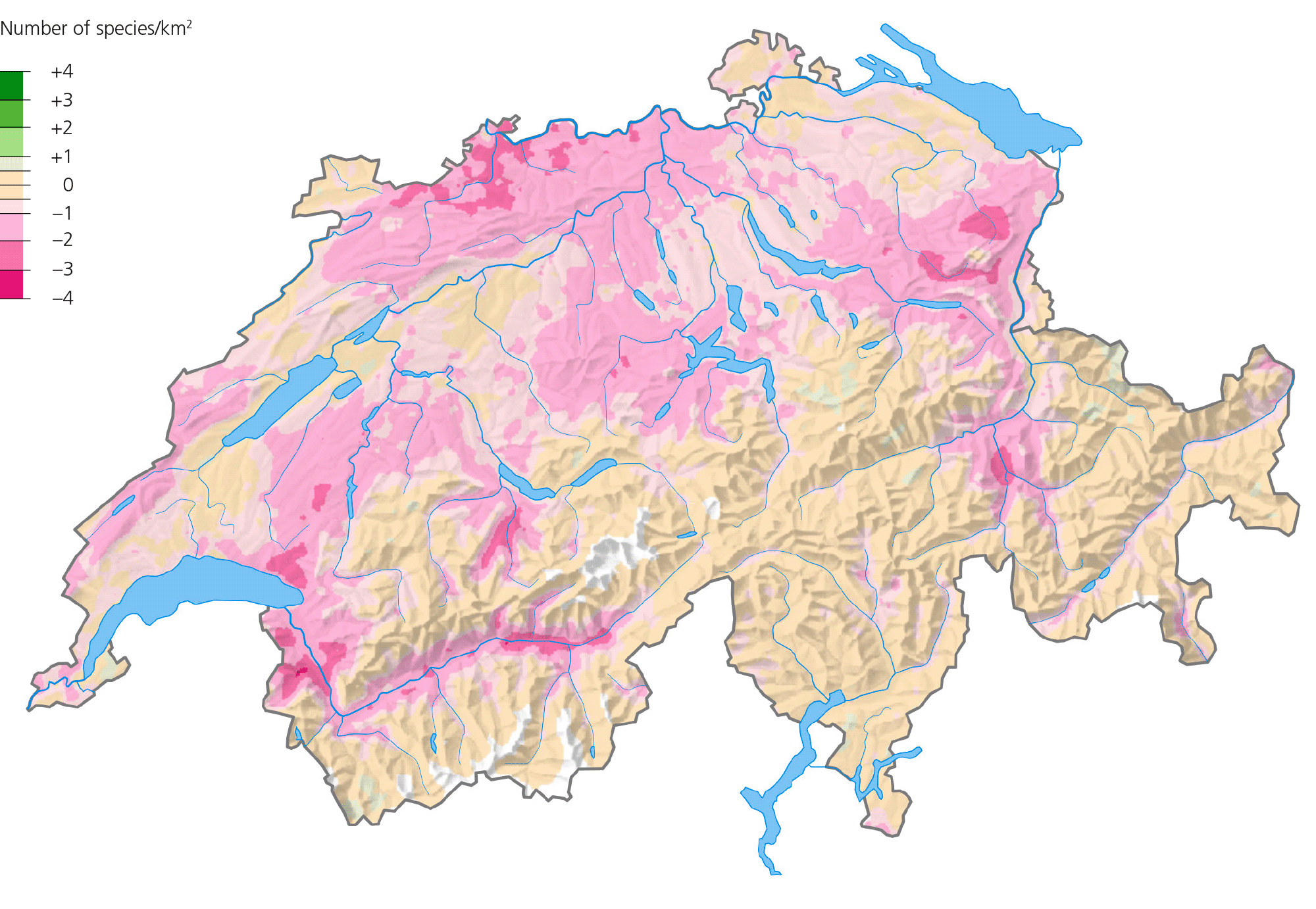 Wetlands and waterbodies: hotspots of species diversity under pressure

The few remaining wetlands are now well protected and management has improved in many places. As a result, the populations of many wetland species have increased since the 1990s, but they remain small and unable to compensate for the losses that occurred in the past. Besides loss of area and isolation, the main problems relate to nutrient input and the human influence on wetland hydrology through water-level regulation and drainage. In addition, disturbance from human activities is increasing at these sites despite their protected status. Restorations can improve the situation, but a sufficiently large surface area, appropriate management and well-controlled visitor flow are essential if these areas are to attract rarer breeding birds such as Western Water Rail and Common Little Bittern. 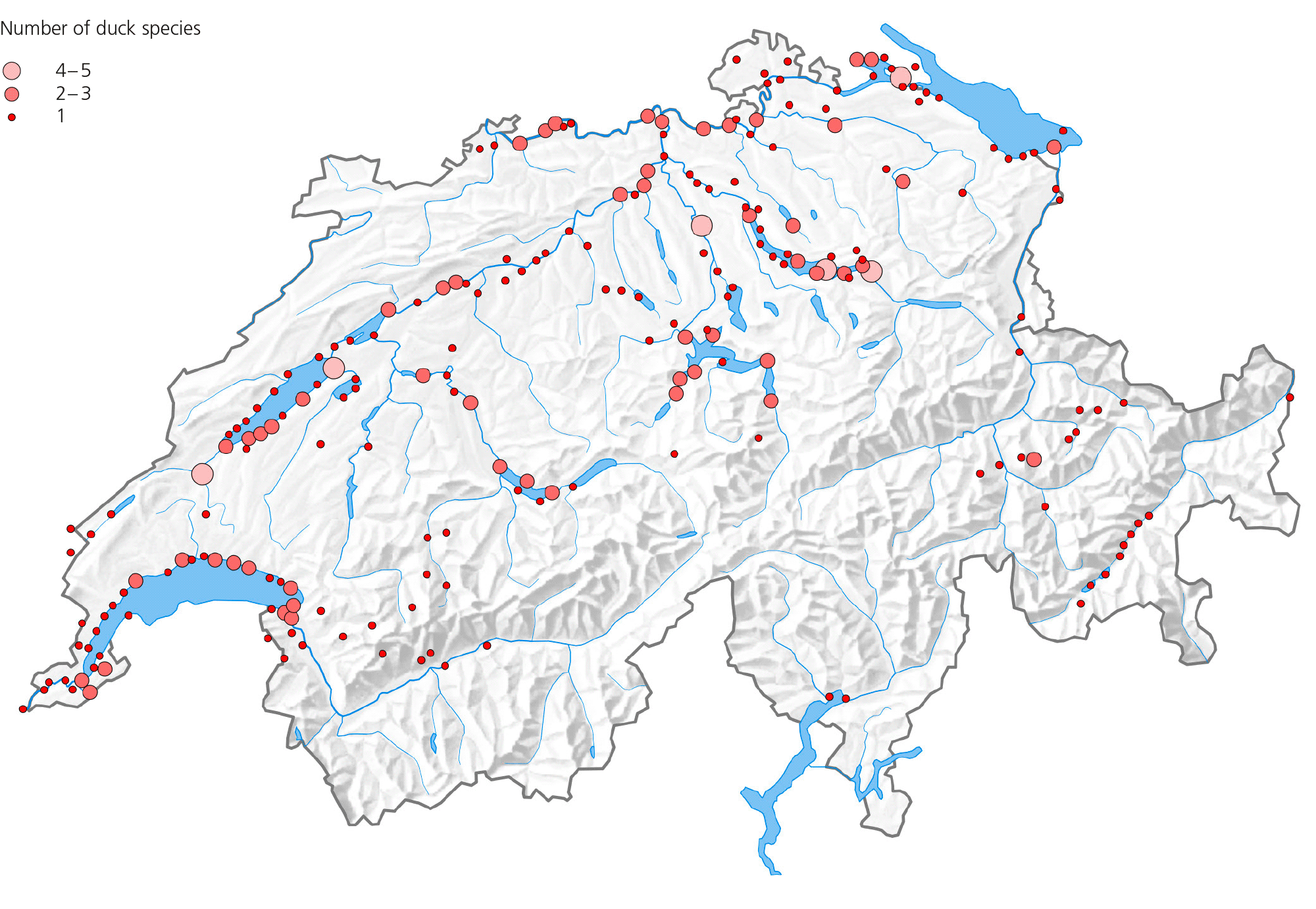 Only few species benefit from the growth of settlements

The area covered by settlements in Switzerland increased by 23 % from 1985 to 2009. In the transition zones between settlements and farmland in particular, many ecologically valuable habitats (e.g. traditional orchards) have been lost to building development and the last semi-natural plots of land have disappeared. Only few birds benefit from the spread of settlements, even though species richness is often higher in settlements than in the intensively cultivated farmland that surrounds them. But settlements are becoming more densely built up and impervious surfaces are increasing, while the remaining green spaces are often over-maintained or contain few near-natural structures. Ruderal habitats and edge structures managed at low intensity, which would offer an abundant supply of seeds and insects, are more and more rare. Birds that nest on buildings, like Common Swift and Northern House Martin, also face difficulties, as they are highly dependent on the willingness of humans to tolerate their presence. Moreover, few new nest holes are created as a consequence of our modern «flawless» building design, and many existing nooks and crannies disappear when buildings are renovated.

The Alps – a world in upheaval

The Alps cover 60 % of the territory of Switzerland. Because of the large altitudinal gradient and diverse landscapes, many negative trends are somewhat mitigated in the Alps: species like Common Cuckoo or Common Redstart have practically disappeared from the Central Plateau, but still have substantial populations in the Alps. But the effects of agricultural intensification are becoming apparent here too, and the populations of Whinchat and Eurasian Skylark, for example, are in steep decline. Moreover, many open, often species-rich sites in areas of marginal economic importance have been abandoned and taken over by shrubs. Due to tourist infrastructure and leisure activities, fewer and fewer habitats are free from disturbance. Climate warming in the Alps is twice as great as the average for the northern hemisphere. The consequences are already evident, for example in the declining populations of Rock Ptarmigan and Ring Ouzel.

Climate change causes many species to move to higher ground

The climate in Switzerland has become much warmer in the past 30 years. Winters are shorter and spring vegetation develops earlier. This is one possible reason why Mediterranean species are becoming more common in Switzerland. Moreover, the altitudinal distribution of breeding birds shifted upwards by 24 m on average between 1993–1996 and 2013–2016. Almost two thirds of 71 relatively common species have seen an upward shift in average altitudinal distribution, 22 of them by more than 50 m. In contrast, only four species experienced a downward range shift of 50 m or more.

A common pattern has emerged for 20 species with different habitat requirements (e.g. European Pied Flycatcher, Alpine Accentor, Tree Pipit) that is particularly alarming: their populations are decreasing at lower altitudes while increasing in the upper reaches of the range. This effect is expected to become even more pronounced in the future. Because surface area decreases with rising altitude, the described trend will eventually lead to population declines. 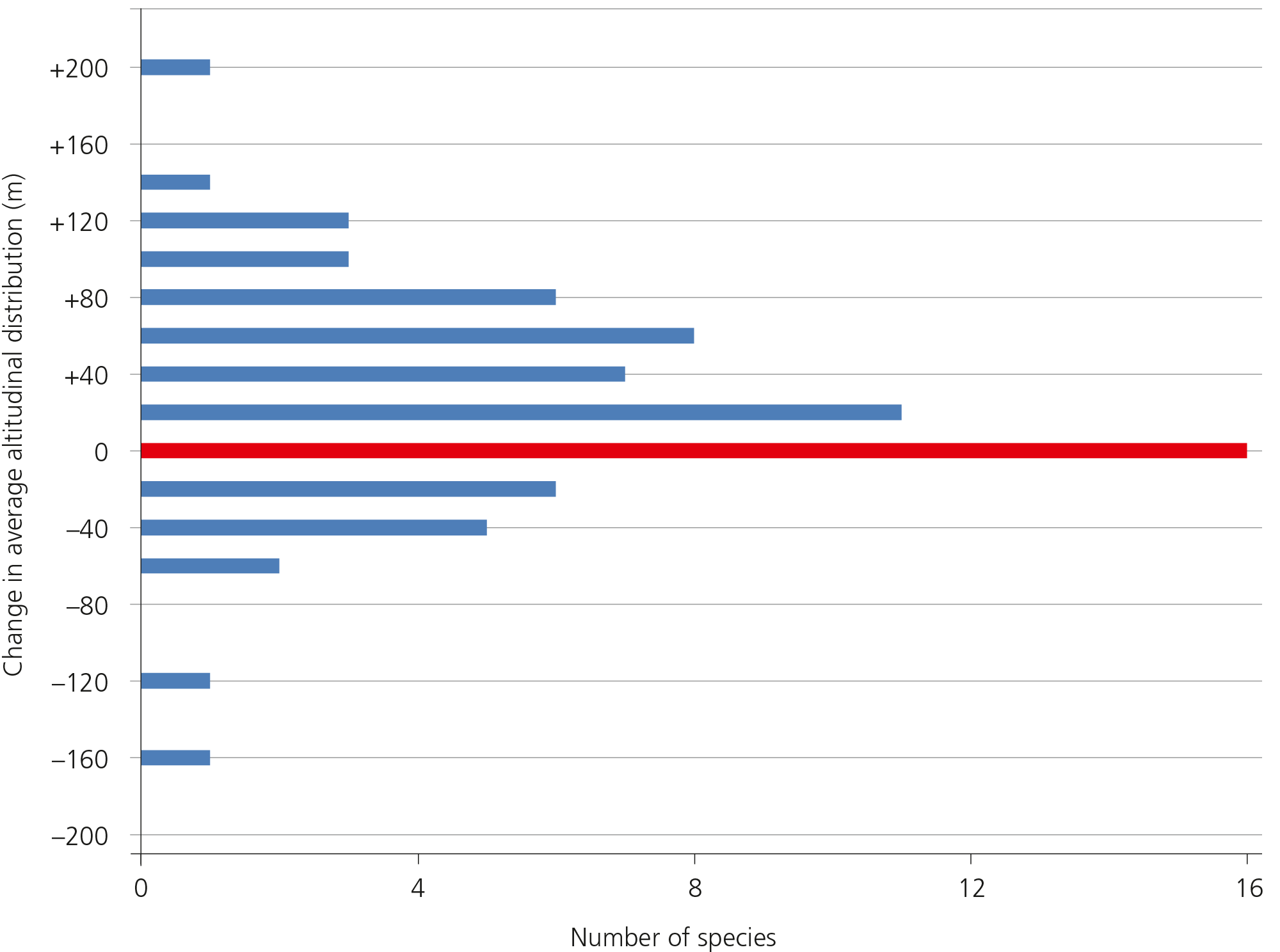 Change in average altitude for 71 species between 1993–1996 and 2013–2016. The species showing an upward range shift (above the red column) are more numerous than those that experienced a downward shift (below).

The conservation of certain threatened birds requires species-specific measures. Since 2003, the Swiss Species Recovery Programme for Birds has provided added support for the protection of selected bird species. The results of the 2013–2016 atlas confirm that the efforts have met with success. Some species benefit from the provision of artificial nest sites, such as Common Barn-owl, Common Tern, Common Hoopoe and Eurasian Jackdaw. Other species require targeted measures to improve habitat quality. The examples of Little Owl, Eurasian Wryneck and Middle Spotted Woodpecker show that this approach works. To secure the survival of these populations in the long term, conservation efforts must continue. Other species with declining populations will need to be included in the species recovery programme. Besides the necessary funds, meeting these urgent challenges requires mutual understanding and close collaboration between authorities, conservationists, land owners and land users.

The 2013–2016 atlas shows encouraging trends for many bird species. Most of them are woodland birds that have benefited from the improvements in forest habitats. But this cannot mask the fact that many rare species have become even scarcer since 1993–1996 and that elaborate measures are needed to stop them from disappearing completely.

Human activities have a growing impact on bird communities. Besides landscape change, disturbance from leisure pursuits in particular is increasing. Therefore, we need to create refuges for birds in the form of quiet zones and times. Semi-natural forest management must be continued and the volume of deadwood increased, especially on the Central Plateau and in the Jura. In farmland, much greater efforts are required to restore the ecological balance. Wetlands and waterbodies need to be protected from adverse influences (e.g. disturbance, nutrients, pesticides, drainage) and should benefit from more large-scale restoration projects. In settlements, open spaces and especially areas of high ecological value should be preserved, or replaced if they are used for construction. Building development outside of the building zones must be stopped. Valuable alternative habitats such as gravel pits and quarries need to be preserved even when exploitation has ended. Consumers can also make an important contribution to the conservation of our native biodiversity by consciously choosing to buy biodiversity-friendly and regional products. In our gardens and on our balconies, native plants, a rich variety of structures and the absence of pesticides go a long way in supporting native birdlife.

The 2013–2016 atlas contains a wealth of data and points to the problems faced by breeding birds in Switzerland. We hope that the atlas can help to develop solutions and contribute to the successful recovery of threatened species.