No limits to leisure activities?

Panels placed along the ski runs explain the purpose of quiet zones for Black Grouse. Not all visitors are willing to comply with them yet. © Stephan Trösch

Many bird habitats are also used by humans for recreation and leisure sports. These human activities cause varying degrees of disturbance which can lead to a decline in certain bird populations. Densely populated Switzerland is home to a vast number of outdoor recreation seekers, so species sensitive to disturbance are particularly vulnerable.

Disturbance refers to an event that leads to sudden changes in behaviour and/or metabolism. Signs of disturbance that are observed in the field include escape flights, alarm calls, increased vigilance, or distraction displays near the nest. But disturbance is not always easily recognised. Birds that react to human activities by remaining motionless may nevertheless be affected. Studies of grouse show that such situations cause the release of stress hormones and changes in heart rate, but no striking changes in behaviour.

The effects of disturbance are often difficult to measure. Elaborate methods are necessary, as the same individual can display various reactions depending on its physical condition, environmental factors, and the intensity and duration of the disturbance. In addition, a combination of factors are often at play (e.g. disturbance and habitat changes), so that it can be difficult to isolate the effects of disturbance. However, there is no question that disturbance can cause birds to abandon certain areas or reduce an individual›s life span or reproductive rate, leading to a decline in population size in the long run. Along with habitat loss, disturbance is now thought to be the main reason for decline in several bird species. 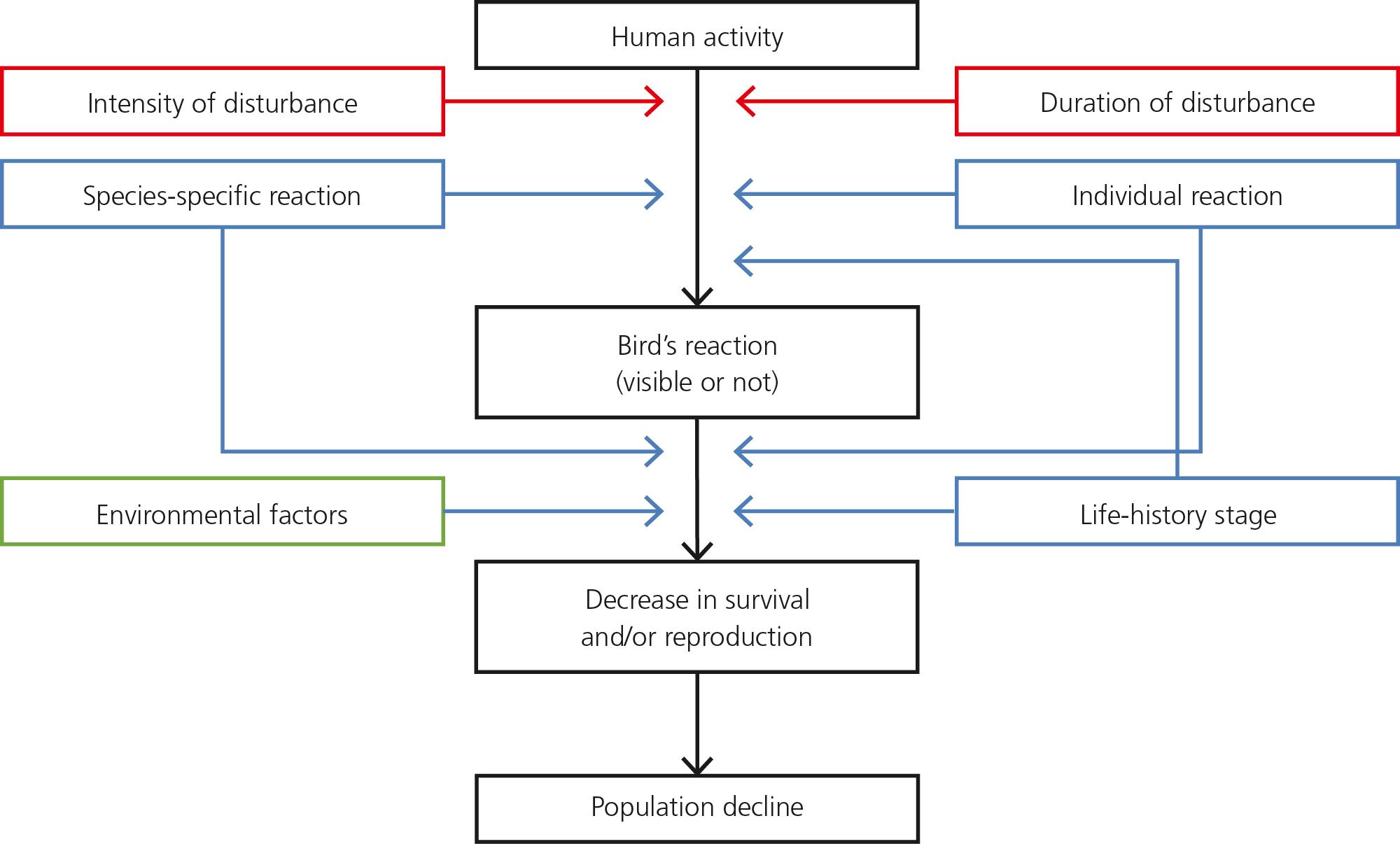 Human disturbance can lead to the decline of bird populations. The effects of human activities depend on the intensity of the disturbance (red), the characteristics of the individual bird (blue) and environmental factors (green).

When is disturbance especially problematic?

Birds are particularly sensitive to disturbance during the period of territory establishment, which for most species occurs in spring, as this is when they select a suitable site for breeding. But disturbance has a huge impact during the actual breeding season as well, when it affects the future generation as well as the current one. We all admire a fantastic shot of a Golden Eagle. But such pictures often require the photographer to approach the nest, which may have fatal consequences and lead to brood loss. Less spectacular species and even those living in proximity to humans are vulnerable, too: dogs on a leash and other forms of minor disturbance can reduce the density of a population and even biodiversity; major disturbance can cause birds to abandon their brood. Moderate and short-term stress can also affect the quality of the offspring, as stress hormones released during egg formation are deposited in the egg, affecting the traits of the chicks.

Species whose habitats are popular locations for outdoor activities are especially vulnerable to disturbance. Common Sandpiper and Little Ringed Plover, two species that nest on the few remaining gravel banks of our rivers, suffer major disruptions from paddle boats and bathers, which regularly cause the birds to abandon their broods. Climbing can lead to conflicts with cliff-breeding species such as Peregrine Falcon, Eurasian Eagle-owl and Golden Eagle. And who would have guessed that even ice climbing in winter can affect breeding Bearded Vultures?

For grouse, the breeding season is not the only sensitive time of year; in winter, these birds operate on a low energy budget. In addition, the available habitat is significantly diminished by human recreation. Especially off-piste winter sports (ski touring, snowshoe trekking, freeriding) intrude into the wintering habitats of Black Grouse, Western Capercaillie and Rock Ptarmigan. The flushing of Black Grouse and Capercaillie leads to extra energy expenditure and higher stress-hormone levels. But mass tourism on the slopes has negative effects as well: the number of displaying Black Grouse is lower in ski resorts than in other areas. In the Valais, only one fourth of the Black Grouse›s wintering grounds is unaffected by winter sports.

A single boater can cause hundreds of waterbirds to take flight (the picture shows mainly Red-crested Pochards). More must be done to raise awareness in the context of water-based recreation, too.

Leisure activities in nature are popular and outdoor sports will continue to increase. Visitors are penetrating further and further into the remote habitats of many bird species. An example of an outdoor activity that has recently gained popularity is geocaching, a kind of treasure hunt. It can cause considerable disturbance, especially around cliffs where sensitive species have their nests, as the search for «caches» can go on for hours in otherwise undisturbed areas. Another new trend is stand-up paddling, a sport that involves standing on a kind of surfboard and using a paddle to move across the water. Paddlers often fail to keep the required distance to protected zones, causing waterbirds to take flight. This happens mostly out of ignorance and often goes unnoticed by the paddlers themselves. When young waterbirds (e.g. ducks, Great Crested Grebes) are separated from their parents, they have little chance of survival.

Who would have thought a mere five years ago that drones would be used recreationally by civilians and become a common feature of everyday life? Today, they represent an intolerable disturbance in areas with large gatherings of birds as well as near cliffs that accommodate sensitive breeding bird species. No-fly zones have already been established for conservation reasons in federal waterbird and wildlife reserves.

Besides leisure activities, events that attract large crowds can also cause significant disturbance. Fireworks, light shows and concerts in the proximity of sensitive sites can seriously affect breeding success in some species, but also habitat quality.

To eliminate disturbance from human recreation and its negative impact, the needs of birds and humans need to be separated through spatial or temporal restrictions. This can be achieved by requiring visitors to stay on the trails and introducing protected zones. To be effective, such protected zones must be clearly marked. Publishing recommendations for visitors can dramatically reduce the threat to birds in unprotected areas as well. The campaign «Respect to protect» succeeded in lessening disturbance in many areas to the benefit of wildlife. It is crucial that the campaign be continued and extended to the summer season. The precautionary principle requires us to create refuges for birds. Only when visitors accept quiet zones and times and keep to the paths and slopes can we achieve long-term protection for sensitive species in such a densely populated country.