The Grande Cariçaie is by far the most important wetland in Switzerland. It takes costly maintenance measures to mitigate the negative effects (siltation, shrub encroachment) of artificial water-level regulation. © Verena Keller

While the populations of many wetland species have increased, they remain small and unable to compensate the losses that occurred in the past. Besides loss of area and isolation, the main problems are linked to the human influence on wetland hydrology through drainage and water-level regulation.

The large river regulation schemes and many smaller drainage projects have led to the loss of more than 90 % of mires since 1850. A detailed analysis of maps has shown that the greatest area loss occurred in the larger wetlands (at least 10 km2 in size). Today, only few wetlands larger than one km2 remain, e.g. Les Grangettes VD, Pfäffikersee ZH, Bolle di Magadino TI or Neeracherried ZH. Even our largest wetland, the Grande Cariçaie on the southern shore of Lake Neuchâtel that covers about 30 km2, is small compared to wetlands elsewhere such as the Biebrza Marshes in Poland (approx. 1000 km2). The importance of the Grande Cariçaie is demonstrated by the fact that 41 of the 52 breeding bird species associated with wetlands in Switzerland were recorded there in 2013–2016. More than 50 % of Switzerland’s Purple Herons, Savi’s Warblers and Bearded Reedlings breed there, and more than 10 % of Red-crested Pochards, Great Crested Grebes, Common Little Bitterns, Western Water Rails, Black-headed Gulls, Common Terns, Great Reed-warblers and Reed Buntings.

Small size and isolation are a problem

The distribution maps for wetland species clearly demonstrate the importance of the bigger wetlands. The fact that large areas accommodate more species than small ones is hardly surprising. But large wetlands are also more regularly occupied, as a comparison of species counts for the areas surveyed annually in the wetland monitoring scheme shows. Data from the wetland monitoring scheme also reveal that many species breed in higher density in large wetlands than in small ones. The analysis counted the number of territories in the whole survey area, which may include expanses of water, woodland or small residential areas. Densities were higher in large wetlands for species that breed in reedbeds in particular, such as Western Water Rail, Common Reed-warbler, Savi’s Warbler and Reed Bunting. 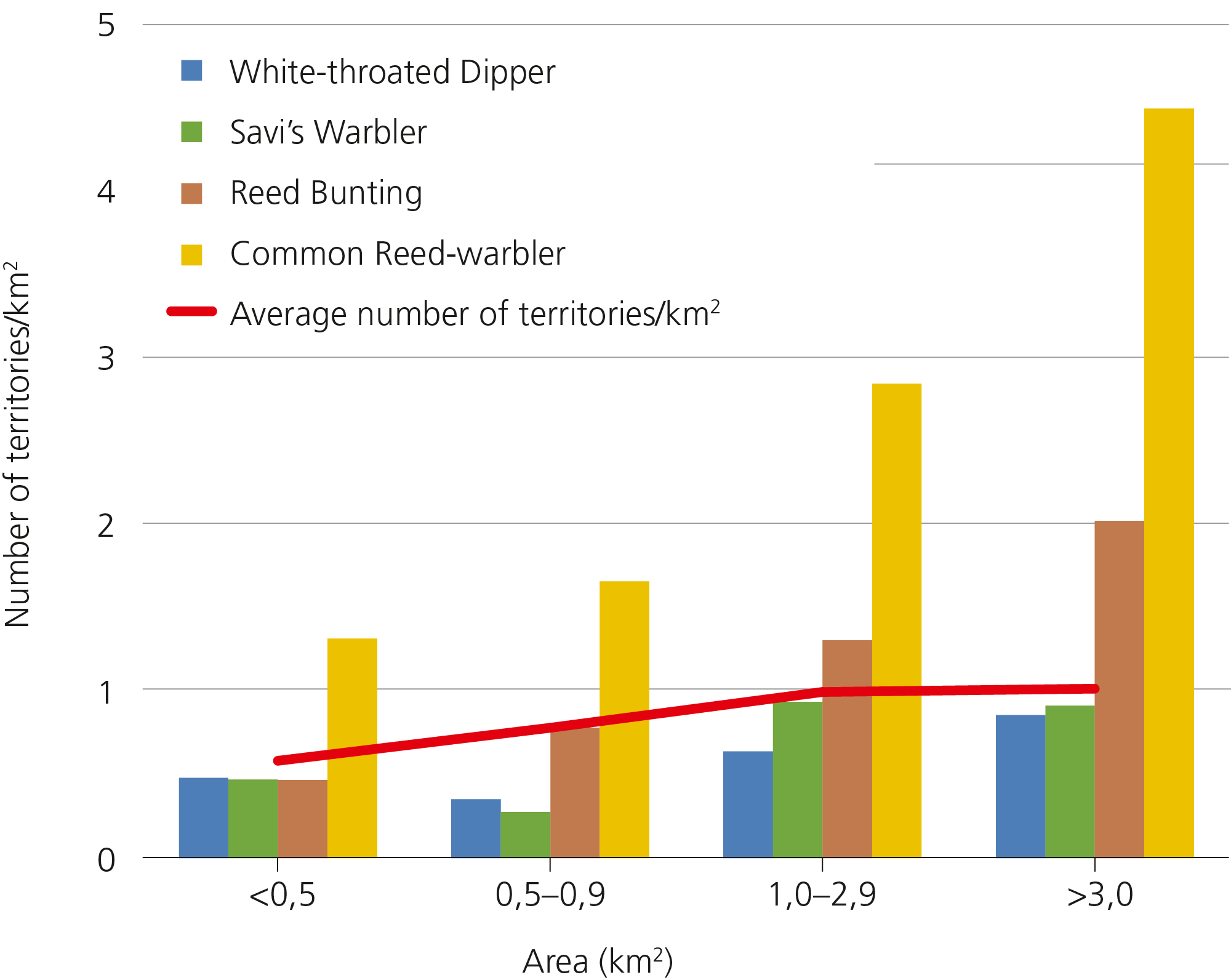 In wetlands larger than 3 km2 (total survey area) the number of typical wetland species is twice as high as in very small wetlands (columns, left axis), and the species bred there in more than three out of four years during the atlas period 2013–2016 (line, right axis). Comparing the 106 annually surveyed areas, breeding is less regular in smaller wetlands. 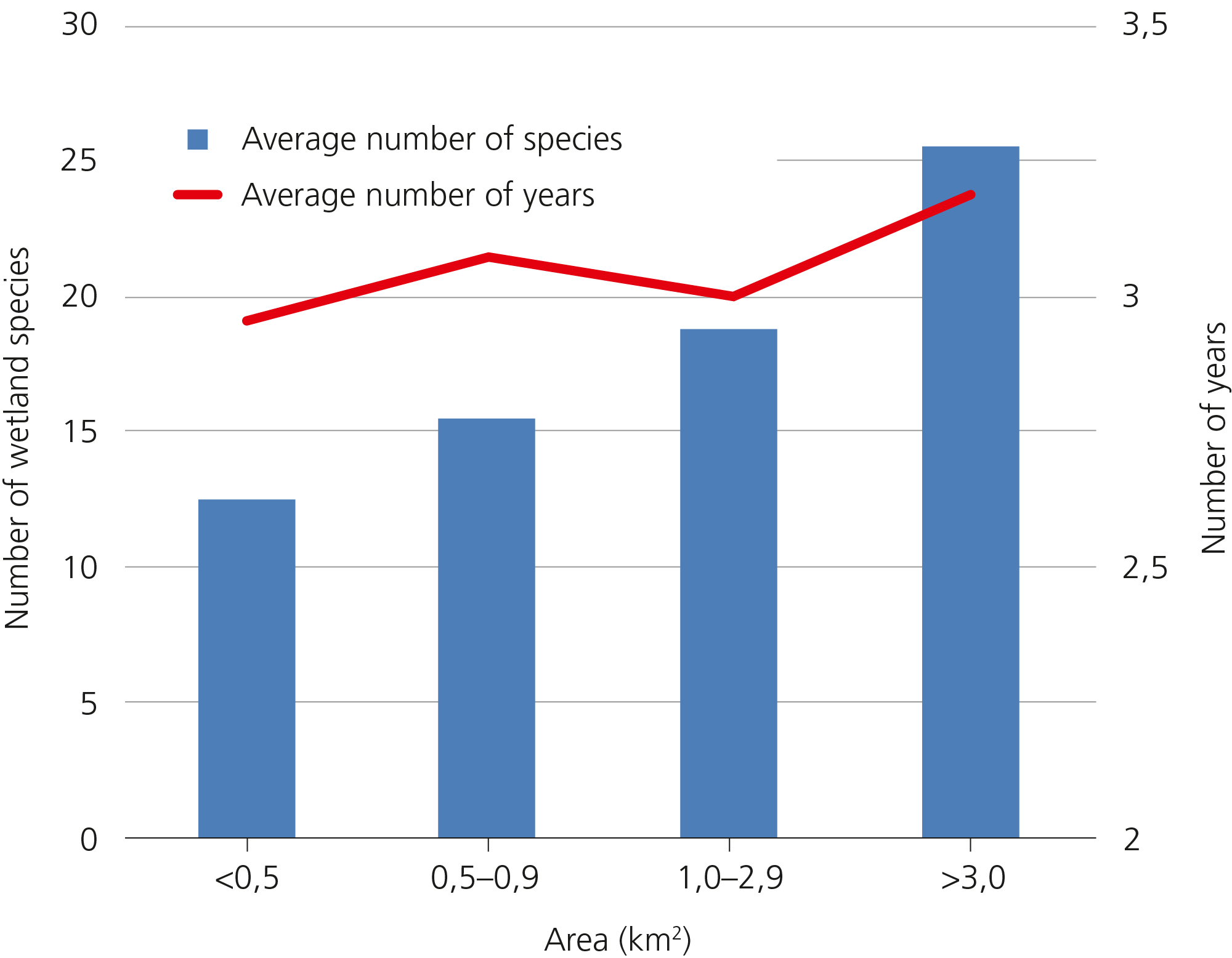 In large wetlands, many species occur in higher densities than in small ones. 18 relatively common species (no colony breeders or species that chiefly breed along rivers) in 89 annually surveyed wetlands were included in the analysis. Density pertains to the total area surveyed.

Along with size, the isolation of wetlands also plays a role. Small and isolated wetlands are less frequently occupied by the Reed Bunting than large ones. The fragmentation of areas that used to be continuous could be one reason for the decline of this species that has led to its inclusion on the Red List. Common Snipe and Eurasian Curlew were among the last birds to disappear from the once vast expanses of wetlands in northeastern Switzerland. Today, these areas are too small and isolated even for these species.

The wetlands that remain today are not only much smaller, but also offer poorer quality habitat for many birds owing to nutrient input, inadequate water levels and increasing disturbance from human recreation. Many wetlands are drying up due to drainage of surrounding farmland and water-level regulation on lakes and rivers. With the exception of Lake Constance and Walensee, the outflow of all larger lakes in Switzerland is regulated to prevent damage through flooding.

The example of the Purple Heron, a species that breeds almost exclusively in the Grande Cariçaie, illustrates the impact of water-level regulation. The second Jura river regulation project in 1962–1973 and the subsequent stabilisation of the water level reduced the fluctuations that occur in the course of the year. Following the second Jura river regulation, the Purple Heron population declined considerably. Today, large parts of the reedbeds and sedge marshes are often not flooded at the start of the breeding season like they were before the 1970s. This is a problem both for amphibians and for fish that rely on shallow water as nursery grounds. Species like the Purple Heron, which forages in shallow water, or Savi’s Warbler, which builds its nest above the water, often stay away completely. The peak water level is often not reached until late May or June, when the rising water destroys the nests of many species that selected their nesting site in accordance with the lower water level at the start of the breeding season. Exceptional events like the spring high water in 2015 show that abandoned sedge marshes could be recolonised if the water content increased. In the Grande Cariçaie, Black-headed Gulls and Common Terns began to breed in the sedge marshes like they did in the past in wetlands like the Kaltbrunner Riet SG. Thus, the high water could actually have had a positive impact, but the water level was lowered again so quickly that the colonies were abandoned, probably because they were no longer protected from predators such as foxes. Wetland birds are adapted to fluctuations in the water level and losses caused by flooding are normal. However, the species are not adapted to artificial fluctuations that do not correspond with their phenology.

Small and isolated wetlands are important stepping stones between larger areas, but they do not provide sufficient habitat to support large populations.

Protection and management are key

The populations of many wetland species have increased since 1993–1996. Wetlands are now under protection and management has improved in many areas. While management used to focus on preventing shrub encroachment by mowing large areas of reeds, more targeted and diverse measures are now used in an attempt to meet the requirements of various animals and plants. But the positive trends should not obscure the fact that populations remain very small and therefore vulnerable. The Eurasian Curlew has disappeared completely and the Common Snipe has become an irregular breeder, which clearly shows that our wetlands need to be restored at a large scale to give these and other species a chance.

Nesting sites for gulls and terns

Gulls and terns breed in the transition zone between land and water. Breeding in colonies on islands allows them to defend collectively against predators… 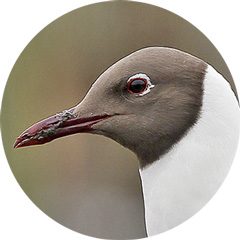 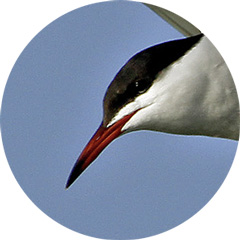 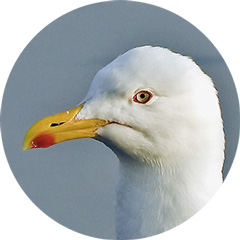 Herons and egrets make a comeback

The 2013–2016 atlas not only documents the increase of the Grey Heron population, but also the recovery of the Purple Heron, the first brood of Great White… 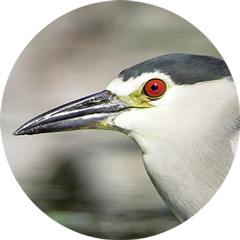 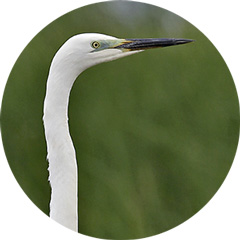 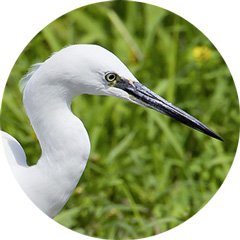 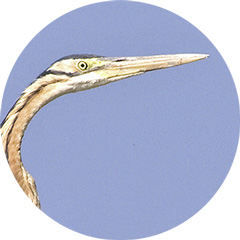 Little Ringed Plover and Common Sandpiper, both typical species of floodplains, are not faring well in Switzerland. Human interventions have tamed rivers… 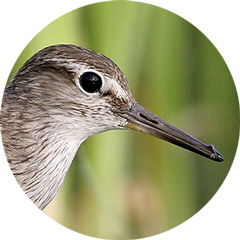 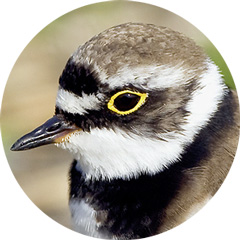