ornitho.ch – a wealth of data for many purposes

«Pro Natura is designing a new maintenance concept for area X. We would like to use all bird observations in that area as a basis.» Or: «We are working on a model to depict the future distribution of the main forest types in the Alps. Could you give us information on the breeding periods of Tawny Owl, Boreal Owl and Black Woodpecker?» Or: «We have been asked to evaluate a habitat network. For this purpose, we need the most recent distribution data for farmland species in the following municipalities...». 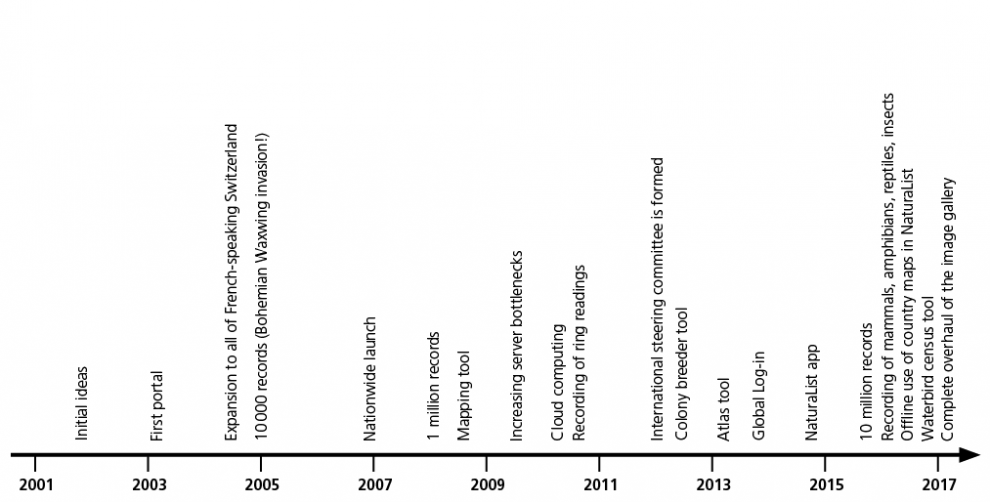 Milestones in the history of ornitho.ch

These are just a few examples of enquiries directed to the Swiss data centres day after day. In 2016 alone, the Ornithological Institute received more than 300 such requests from ecological consultants, NGOs, government offices or researchers. The needs have changed enormously in the last ten years, and there is a growing exchange of data at the international level, too. Thanks to ornitho.ch, we can respond to these requests much better today, as the platform provides much larger spatial coverage as well as more recent and more accurate data for specific locations than were available before.

Multi-stage quality control
The records collected on ornitho.ch are used in scientific assessments and for planning purposes, among other things. Isolated mistakes are inevitable in a database of more than one million observations. But we want data users to know that we take every possible precaution to make sure the data we provide are as accurate and reliable as possible. Our goal is to achieve a high degree of reliability and credibility through multiple levels of quality control. Once entered, a record first passes through an automatic filter. The filter checks for anomalies regarding time, place or number of sightings. Should any be detected, the user receives an automated message asking him or her to confirm the entry. Once it has been confirmed, the 30 or so regional coordinators are notified and asked to check the entry. The regional coordinators are experienced field ornithologists who review the entries and ask for clarification whenever necessary. Before the record enters into the Ornithological Institute’s databases, further steps are taken to ensure the quality of the data. Finally, data users are generally only provided with data that were collected by registered volunteers, who all have several years of experience in field ornithology. These registered volunteers enter about two thirds of all records gathered on ornitho.ch.

It is much more common today for ornithological data to be used in planning and in scientific analyses. That is a good thing. The data directly contribute to conservation efforts in many ways: by detecting individual species in distress (such as the Corn Crake), helping to define site boundaries for future recovery projects (Eurasian Wryneck) or supporting success monitoring (Eurasian Hoopoe). Individual users have the satisfaction of knowing that their records do not simply land on a massive data pile, but are continually applied to a range of practical purposes. For the data centres themselves, the great challenge lies in selecting the most useful data while protecting the needs of sensitive species, showing individual ornitho users due consideration and fulfilling client requests. They need to process the data so that they serve their purpose without giving rise to misinterpretation or implying false precision (birds have species-specific spatial needs, even if an observation site is recorded with high spatial precision ). This means that the data centres still have to verify the selected data, make adjustments and, in case of doubt, consult with the user who made the report. 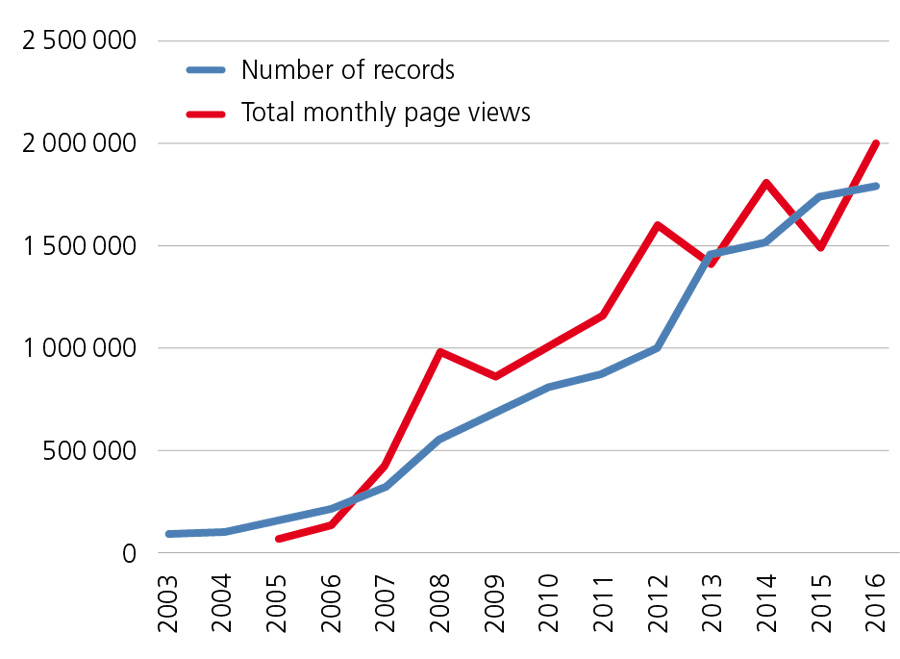 10 years of ornitho.ch
In early 2007, ornitho.ch went online throughout Switzerland. Before that date, the platform – developed by Biolovision S.à.r.l. in Ardon VS – had already been a big hit in Geneva and later in the entire French-speaking part of Switzerland. Since then, almost 15 000 registered users have entered more than 13 million observations. The number of annual records increased more than fivefold between 2007 and 2016. The period 2013–2016 provided further momentum, as the data for the breeding bird atlas were collected via ornitho.ch. The number of monthly page views has also steadily increased, now reaching one to two million views every month. In spring 2016, ornitho.ch was expanded to include mammals, reptiles, amphibians and certain insects. Users are increasingly recording these species groups as well. Thanks to 400 000 image and sound files, ornitho.ch is also an important resource for self-directed study. To date, the ornitho family encompasses more than 40 platforms across Europe that have collected about 100 million observations.