Because owls are nocturnal, monitoring their populations requires special efforts. But it is all the more important because the population trends of several species are currently very dynamic in Switzerland. 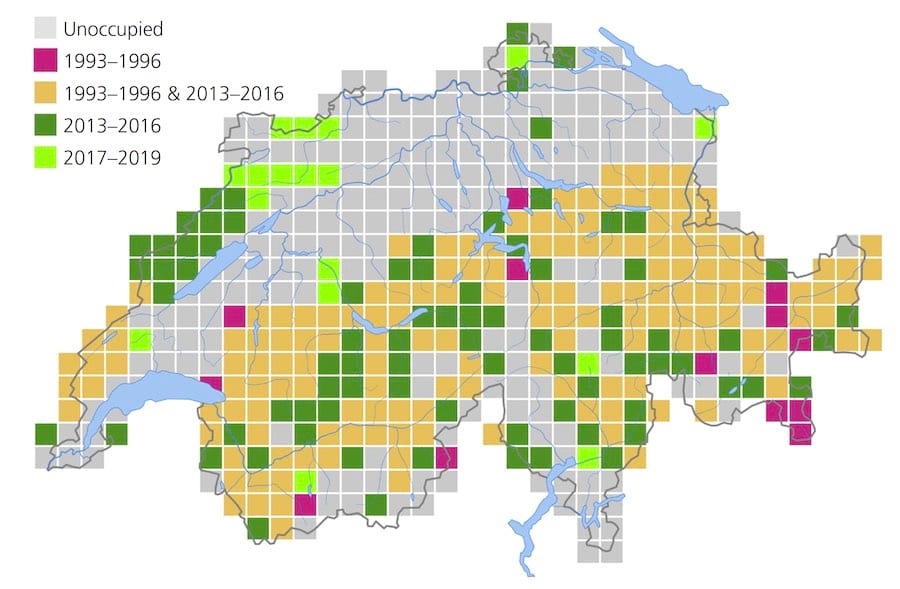 The range expansion of the Eurasian Pygmy-owl between the 1993–1996 and 2013–2016 breeding bird atlases has continued.
Photo © Archive of the Swiss Ornithological Institute

The population trend of the Boreal Owl in the north of the Canton of Vaud, monitored since 1985 by Pierre-Alain Ravussin and his team, illustrates the species’ negative trend in the whole of the Jura. 2011, 2013, 2018 and 2019 were the four weakest years since the study began. Red = breeding in tree cavities, green = breeding in nest boxes.
Photo © Groupe ornithologique de Baulmes et environs. 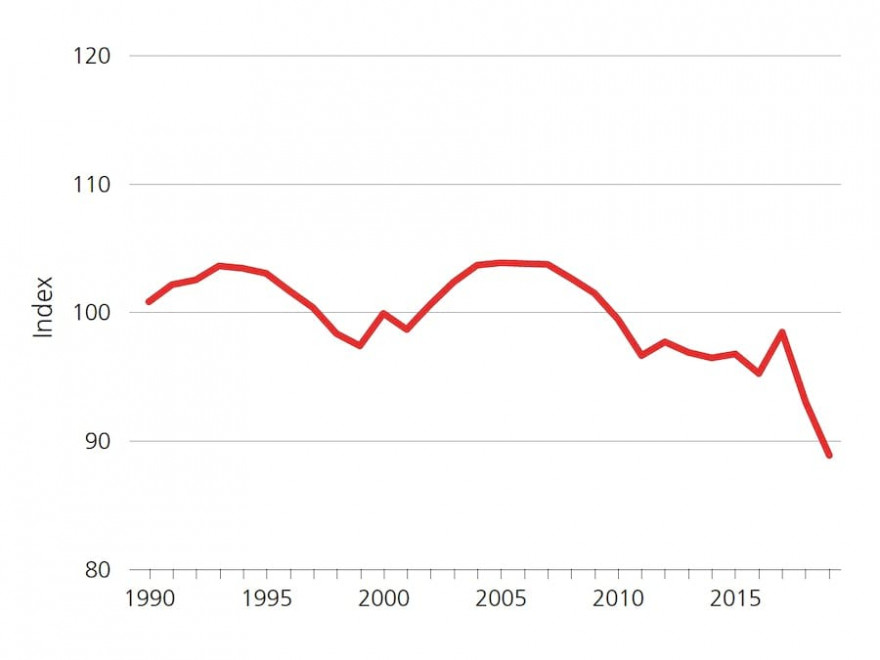 The countrywide population trend of the Boreal Owl appears to be slightly negative in the long term, but the data used may incompletely represent the situation.
Photo © Archive of the Swiss Ornithological Institute

As is often the case, the biggest challenges arise in the monitoring of moderately common species that breed in remote areas. In Switzerland, such species include the Eurasian Pygmy- owl, the Boreal Owl and to a lesser extent the Eurasian Eagle-owl.

Two of these nocturnal raptors showed a substantial range expansion in the period between the two breeding bird atlases. In the Jura, the Pygmy-owl has reached the Canton of Neuchâtel and continues to spread northeastwards, occasionally breeding at lower altitude in northern Switzerland. Populations of the Eagle-owl, on the other hand, have increased in density in some regions of the Jura and the Alps as well as reoccupying some parts of the Central Plateau.

Decline of Boreal Owl populations in the Jura

The differences in monitoring quality may be even larger in the case of the Boreal Owl than in the other two species, because its populations have been closely monitored for a long time in the Jura, but only poorly in the Alps. Assessing the situation of the Boreal Owl for the whole of Switzerland is further complicated by the fact that trends in the two regions appear to diverge: while declines are evident in the Jura, the situation in the Alps seems to be more or less stable.

These findings call for better population monitoring across the board. On the one hand, we hope to benefit from bioacoustic tools; on the other hand, we want to try drawing as much information as possible from the data collected by volunteer field ornithologists. Several studies on the use of bioacoustics in owl monitoring are in progress: a Bachelor thesis on Boreal Owl and Eurasian Pygmy-owl in the Jura and the Pre-Alps, a long-term Eagle-owl monitoring project in Ticino and Grisons (focused on the Engadine), and a pilot project on the acoustic detection of all owl species in the Locarnese region in Ticino led by the Museo cantonale di storia naturale di Lugano.

Eurasian Eagle-owl: easy to miss despite its size

Of all three owls mentioned here, the Eurasian Eagle-owl is the best-monitored species; but even here, our knowledge is incomplete. Monitoring Eagle-owls involves several challenges: not all territories (not even all known territories) are visited every year, occupied territories can be missed during a survey visit, and a territory of a pair can be erroneously classified as occupied by an individual bird only.

Recently we have been able to apply new methods to correct for these influences. We place automatic recording devices (acoustic loggers) in known or suspected territories and analyse the data from ornitho using socalled multistate site occupancy models. Between 2007 and 2016, 19 % of 274 «paper territories» were unoccupied, while 28 % were occupied by individuals and 54 % by pairs, resulting in a total of about 220 occupied territories. In most regions, trends were stable or increasing, which is probably due to immigration from Germany and France. Per visit, an individual’s territory was missed in 71 % of the cases; of the territories occupied by pairs, 20 % went undetected and 41 % were considered territories of single birds; this means that the presence of a pair was recognised in only 39 % of all cases. The results underscore the necessity to combine careful fieldwork by our volunteers with modern acoustic loggers and sophisticated methods of analysis in the monitoring of these secretive and nocturnal species.