Switzerland has a special responsibility

The second European Breeding Bird Atlas (EBBA2) was possible only thanks to the enormous effort of about 120 000 people who counted birds in 48 countries, often far from the beaten path. The wealth of data and results offers conclusions for Switzerland as well. In our country and across Europe, farmland birds are under pressure. Agricultural intensification continues to drive many bird species out of their habitats. Woodland birds, on the other hand, are faring comparatively well. Their population trends in Switzerland are mostly positive. 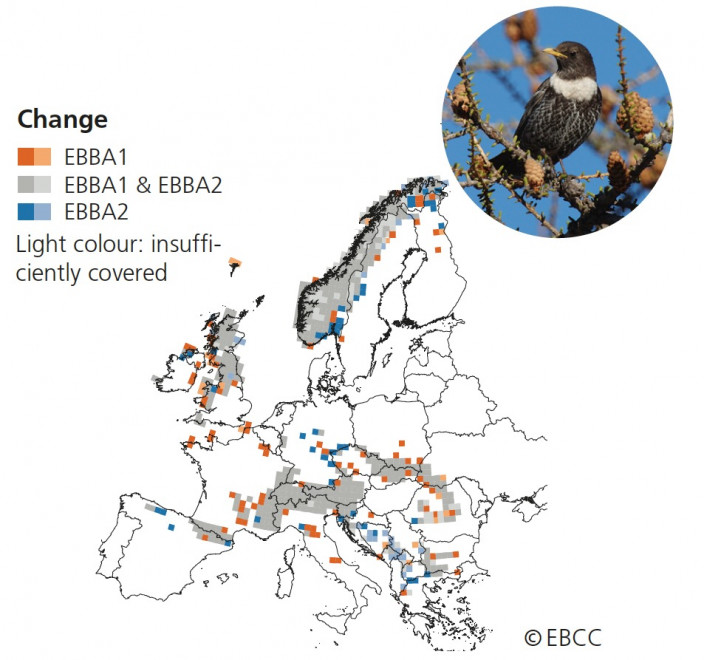 The Ring Ouzel still occurs in Europe at low altitudes, but it is in these environments in particular that the species has lost ground since the 1980s. In Switzerland, the Ring Ouzel shows marked losses below and slight gains above 2000 m asl.
Photo © EBCC 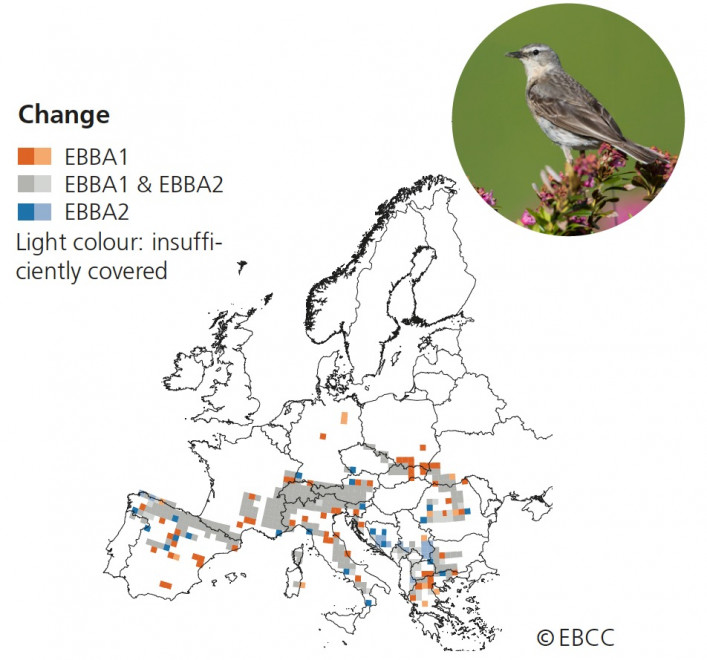 In Europe, the Water Pipit shows losses mainly at mid-elevation and at the range margins. In Switzerland, the average altitudinal distribution rose by about 40 metres between 1993–1996 and 2013–2016.
Photo © EBCC
White-winged Snowfinch
Photo © Marcel Burkhardt 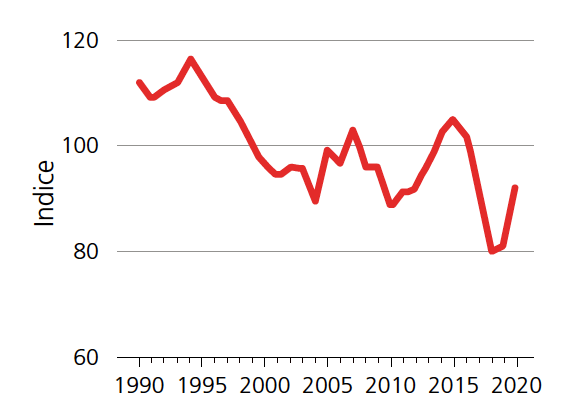 The population index of the White-winged Snowfinch is negative despite fluctuations. On top of that, its distribution area is small and fragmented, and the decline is expected to accelerate due to climate change. For these reasons, the species is now classified as Near Threatened (NT) as on the new Red List, to be published this year.
Photo © Archive of the Swiss Ornithological Institute

A country of mountains

Compared to other European countries, Switzerland is small but mountainous. The Alps cover about two thirds of its territory. The Jura, too, is higher than many of the highest peaks in other countries. That is why Switzerland is home to a proportionally large number of mountain birds, with 10 % of the European population of Ring Ouzel, White-winged Snowfinch, Yellow-billed Chough and Water Pipit, and more than 30 % in the case of the Alpine Accentor. Overall there are almost 40 species for which Switzerland holds an especially large share of the European population.

For EBBA2, breeding bird species were assigned to a main habitat. Fourteen species were categorised as mountain dwellers. The largest diversity of species in this group is found in the Caucasus, home to special birds such as Caspian Snowcock, Caucasian Grouse, Whitewinged Redstart and Great Rosefinch. Species richness is high in the Alps and the Pyrenees as well. Considering all 14 species, declines since EBBA1 were most severe in the Carpathians, Apennines and Pyrenees, but also at lower elevations of the Alps. Of the species in this group that breed in Switzerland, all except one have suffered range losses in Europe: to a greater or lesser extent, this is the case for Yellow-billed Chough, Wallcreeper, Alpine Accentor, White-winged Snowfinch and Water Pipit. These losses are related to climate change, among other factors, as they mainly affect mountains lower than the Alps.

Climate change is having an impact in Switzerland, where – together with changes in land use – it is forcing many breeding birds to higher elevations, as shown by the Swiss Breeding Bird Atlas 2013–2016: the altitudinal distribution of 71 common breeding birds shifted upwards by 24 metres on average between 1993–1996 and 2013– 2016, i.e. by about one metre per year.

The fact that many mountain bird species that have disappeared from parts of their European breeding range also show altitudinal range shifts in Switzerland is especially alarming: the declines at lower elevations are generally more marked than the increases higher up, resulting in an overall decline.

The shift in elevation is especially problematic for species that breed above the tree line, as their habitat gets smaller and smaller towards the top of the mountain. As mountain birds disappear from many other mountain ranges, the importance of the Alps for the conservation of this specialised avifauna grows. Data from Europe show: Switzerland as a central Alpine country must assume its international responsibility and improve the protection of Alpine biodiversity.

One possibility would be to improve the protection in the federal no-hunting zones, which lie mainly in the Alps. Their purpose is to serve as refuges for rare and threatened species, keeping them safe from disturbance. If we succeed, on top of that, in establishing adapted, non-intensive forms of agricultural land use, the no-hunting zones could play a significant role in protecting mountain birds and biodiversity. In other areas, the main task is to keep a close and critical eye on the development of tourism infrastructure. Preserving the remaining healthy ecological infrastructure in the mountains is vital.