Birds are considered reliable indicators for changes in the environment and its habitats. An individual species’ increase or decline, however, is dependent on multiple factors. That makes a general assessment of the changes occurring in its habitat difficult. Indices based on the trends of several species, on the other hand, make such assessments possible. The Swiss Bird Index SBI®, updated annually, contains a set of such indicators. It therefore provides an important foundation for authorities, environmental organisations and nature conservation groups.

The Swiss Bird Index SBI® is calculated based on single species indices of regular breeding birds. We use various methods to calculate these indices, which are in proportion to population size, depending on our data. Trends have been calculated from 1990 onwards. The index is set to a value of 100 for the year 2000. For common breeding birds, the annual values are based on data from the programme “Monitoring common breeding birds”. For rare breeding species, they are based on the percentage of occupied kilometre squares. We also take into account that observation effort has increased significantly in the past years. For particularly closely monitored species, we base our calculations on countrywide or regional population numbers.

Data on population trends of individual species are mathematically combined to form a set of combined indices (species groups), the Swiss Bird Index SBI®. The annual combined indices are equivalent to the geometric mean of the single species indices. Between 1990 and 2015, six species have become regular breeding birds and are therefore now included in the indices, namely Great Cormorant, Purple Heron, Common Eider, Bearded Vulture, Mediterranean Gull and European Bee-eater. The mathematical processing of these new regular breeding species was adjusted with the annual update of the index to SBI 2015. As a consequence, there are some deviations in the indices of previous years. These are most evident in the case of SBI wetlands, as four of the six new species are included in this index. The basic data, i.e. the individual species indices, naturally remain unchanged. 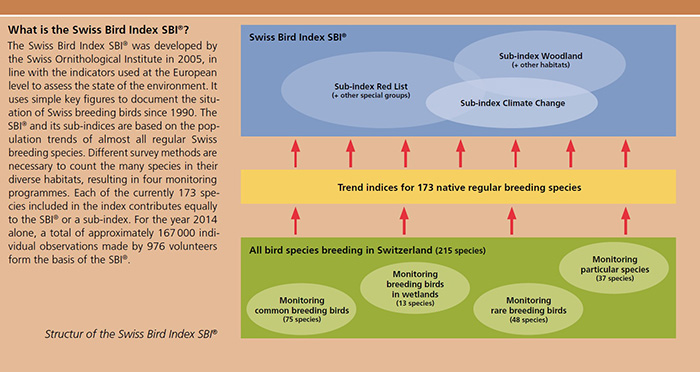 What is the Swiss Bird Index SBI?

The Swiss Bird Index SBI® is used to evaluate progress in the implementation of conservation measures, such as the Convention on Biological Diversity, agricultural policy goals, and the federal biodiversity strategy.

The breeding population indices for individual species are available in our online database Birds of Switzerland (category “Population”) as well in this overview.

The Swiss Bird Index SBI® consists of a general index of all regular Swiss breeding birds as well as several sub-indices. For the sub-indices, species are divided into groups according to a special interest list (Red List, Swiss Species Recovery Programme, International Responsibility, Environmental Objectives for Agriculture), habitats (forest, agriculture, wetlands, alpine habitats, settlements), and the SBI® Climate Change (species that are predicted to increase or decline with climate change). All indices are updated annually using the latest results. The general index and several sub-indices are incorporated into various statistics of the Federal Offices for the Environment, Statistics, and Agriculture. You can download a complete overview of all SBI® combined indices here. Selected results concerning the SBI® are discussed in more detail in the annual report on the state of birds in Switzerland.