The collected data was carefully reviewed and validated in several stages. Together with the regular, close contact with the field ornithologists, this process ensured a high quality of data and guaranteed a particularly thorough review of records at the range margins.

The 2013–2016 atlas is based on two main types of data: territory mapping surveys in kilometre squares and individual records (including complete species lists, colony counts, etc.). Individual records refer to those submitted on www.ornitho.ch by more than 3000 observers. Such records were made in part by observers registered as volunteer collaborators of the Swiss Ornithological Institute (members of the Ornithological Information Service), i.e. field ornithologists with considerable experience who report observations regularly following specific guidelines. But records submitted by other ornitho.ch users were also accepted; in general, these users vary more widely in their ability to identify birds, and many do not record on a regular basis. To ensure that the distribution maps at atlas-square resolution available on www.ornitho.ch were as accurate as possible, the entries needed to be checked regularly. Automated filters provided initial validation, detecting anomalies regarding altitudinal distribution or seasonal occurrence, for example, and forcing users to confirm. Secondly, records were checked by about two dozen regional coordinators of www.ornitho.ch, who see the observations that have been submitted in their region and follow up any unusual records. Finally, the records were reviewed by the atlas team in the process described below. 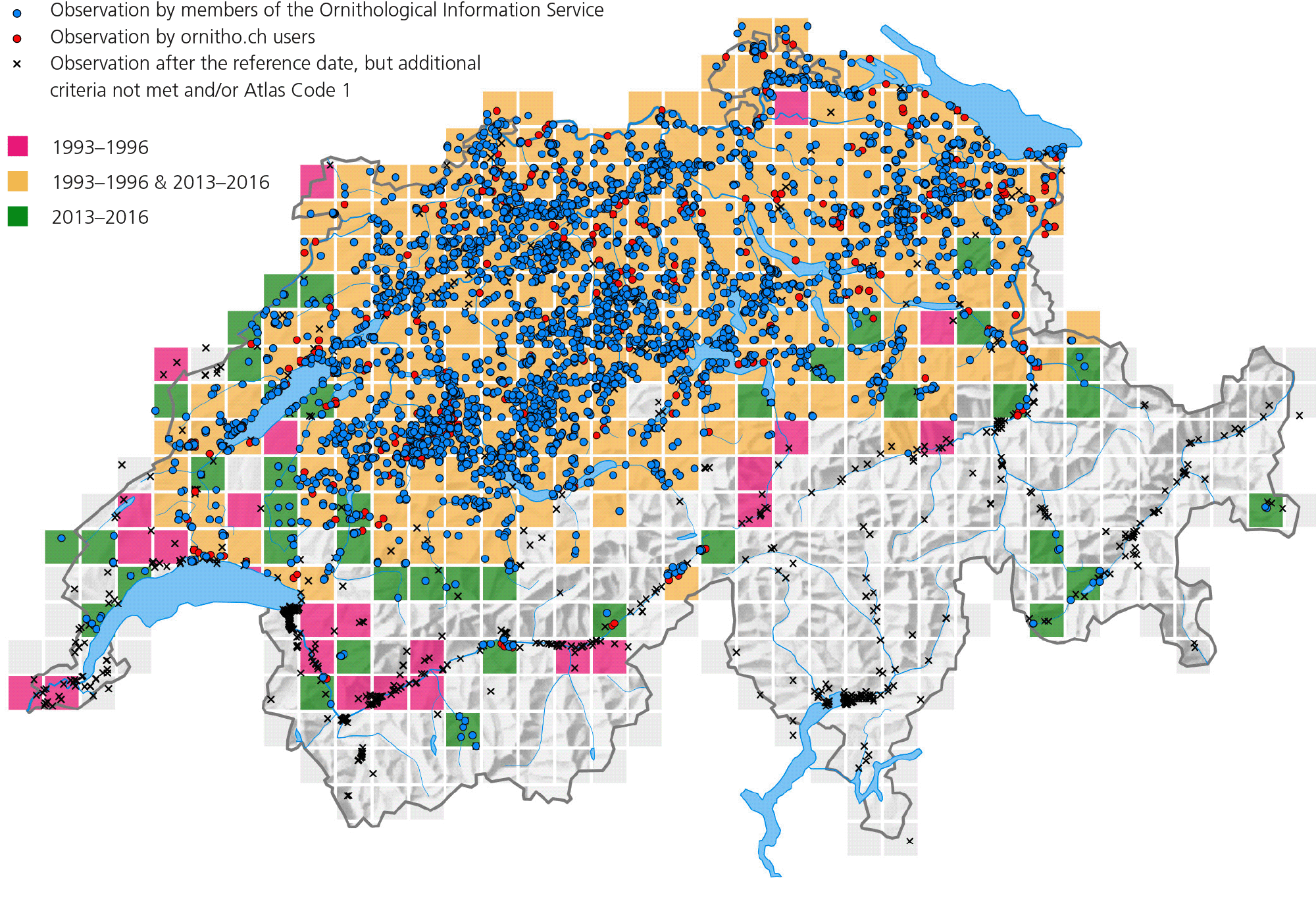 All observations during the breeding season were reviewed, especially for atlas squares (10 × 10 km) that were newly occupied compared to 1993–1996 or that had only one or two records. We also carefully checked observations on the margins of a species' continuous range. The example of the European Pied Flycatcher illustrates the effects of the additional criteria, introduced if the species-specific inclusion criteria were insufficient to make sure that records did not include late passage migrants. Without the additional criteria, several atlas squares in the Alps would have been considered occupied although breeding has never been suspected in the area.

Weekly review: In addition to the standard checks described above, the atlas team reviewed new breeding-season records at weekly intervals, focussing mainly on records of species that had not yet been found in a given atlas square. We asked observers for further details, especially if the atlas square had not been occupied in 1993–1996, if the record seemed unusual, or if it was not sufficiently documented. Other ornitho.ch users, who were not members of the Ornithological Information Service, also had to describe the criteria used to identify the species. The objective was to recognise erroneous records as early as possible and correct them. Compared to a final validation carried out at the end of the breeding season, the advantage of these ongoing queries was that memories of the observations were still fresh and records could be verified in the field if necessary. If observations fell outside of the known breeding range, we required additional evidence of breeding (e.g. for Red Kite, European Pied Flycatcher, Willow Warbler and European Pied Flycatcher in the Alps). We therefore advised ornithologists to attempt to record at least probable breeding evidence (e.g. pair during courtship display, bird carrying nest material).

Annual review: Following each field season, we carried out an annual review of all breeding-season records. This included checking the records from the territory mapping surveys uploaded to www.ornitho.ch via «Terrimap online». Again, we focussed on records of new species that had not been recorded in the atlas square in 1993–1996 and on species that had only been observed once or twice in a given atlas square. This stage of the process also included a particularly careful review of records at the periphery of the range. For some species we introduced additional criteria if the species-specific inclusion criteria alone did not yield an accurate representation of the breeding distribution, mainly due to late passage migrants, wandering summer visitors or non-breeders.

Final review: During the final validation round in early 2017, we conducted further queries and made detailed corrections, for example concerning records outside of a species' known altitudinal distribution. We checked breeding-season records one last time in many atlas squares and followed up with observers where necessary. Although additional criteria had been defined for several species, a few borderline cases remained where the atlas team had to decide whether an atlas square could be considered occupied or not.

All in all, we conducted more than 10 000 queries. In addition, the observers themselves regularly drew our attention to entries that were possibly incorrect. 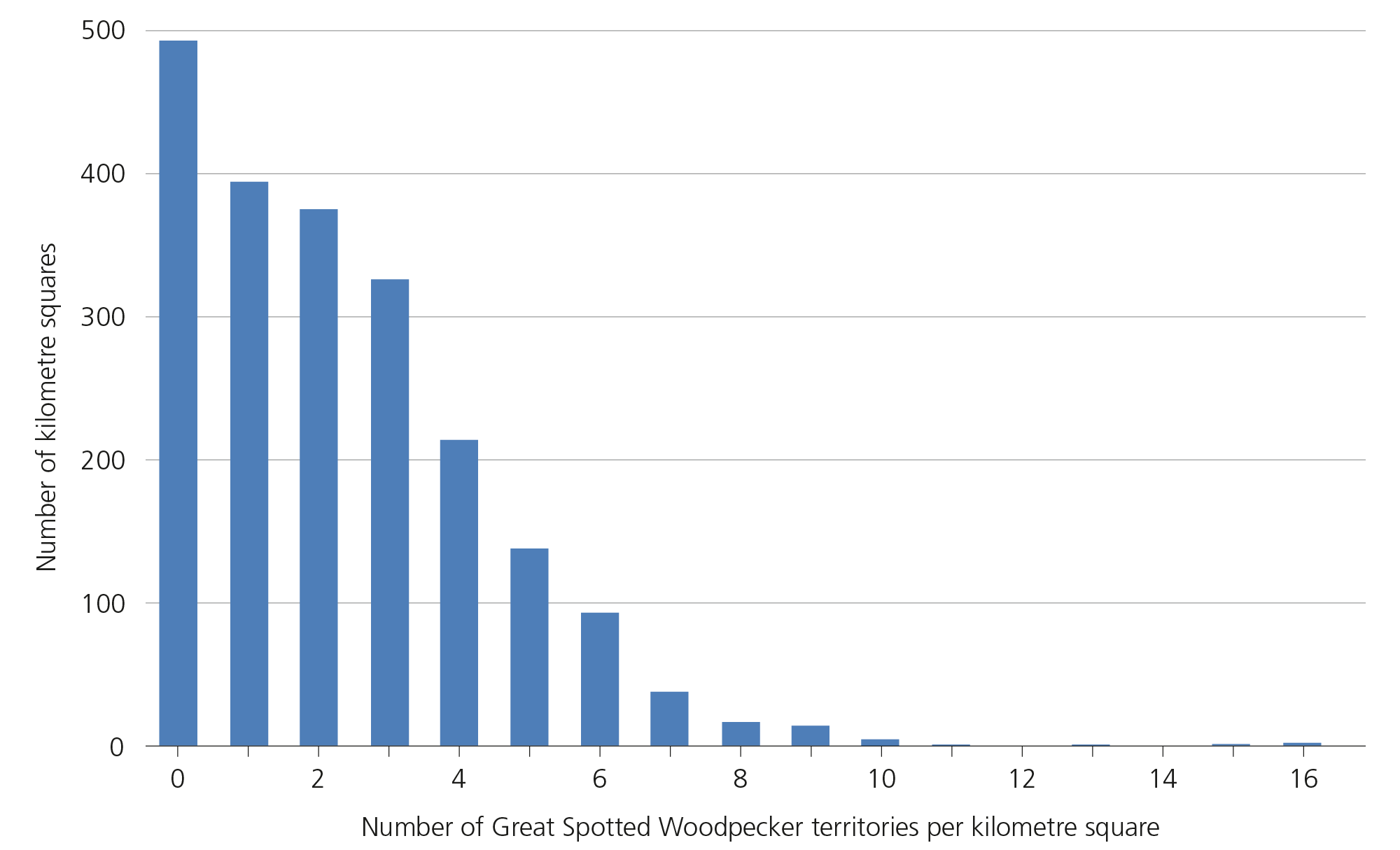 Once fieldworkers had digitised the observations made during the survey visits and defined territories on «Terrimap online», the results were verified by employees of the Swiss Ornithological Institute with a lot of field experience. To ensure consistency, the results were reviewed following a 12-point checklist. We checked whether all observations had been digitised, the seasonal timing of visits, the number of simultaneous observations, and whether all expected species had been found. The main part of the process involved validating the defined territories according to species-specific considerations. A compilation of examples from the common breeding bird monitoring scheme and «Biodiversity Monitoring Switzerland (BDM)» served as a guideline to ensure that territories were defined in a consistent manner [1]. Finally, an overall assessment of the mapping results in each kilometre square was made and individual feedback sent to the observers. The observers were given opportunity to comment on the corrected results before the review process was concluded. If the quality of a survey was insufficient, it was repeated in one of the subsequent years.